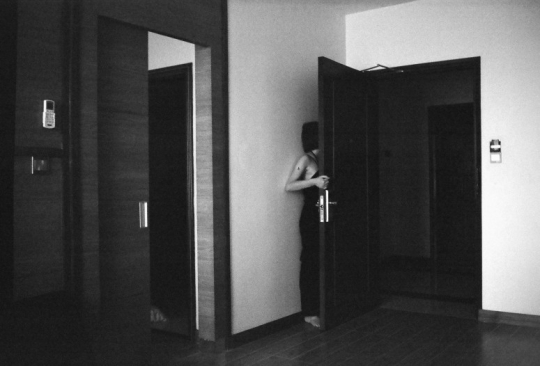 One journey begins in Graz, in April 2020, the director’s trip back to China in the midst of the lockdown: flight connections on a cracked phone screen, hazmat suits on the aeroplane, tape sealing the hotel room door. But it also intermingles with another, earlier journey from the start, the family trip from China to Myanmar to find out what happened to great-grandfather, who left in the 1940s and never came back; his daughter, the grandmother, is still moved by his absence, just as the director is moved by her in turn. The director films both trips and everything around them too, that’s why it’s so hard to keep things apart, always the same fascination for patterns and textures, the same grainy video in black and white, the same eye for unlikely beauty, the same unflinching gaze. The true meaning of family is so very elusive, for the director, for her grandmother, for her girlfriend and their social group too; as they converse in Mandarin and English, there is love and solidarity, but also pain. The girlfriend comments that there’s no main character in the film, but how could there be? Mind in one place, body still in another, jet lag is the ultimate decentred state.