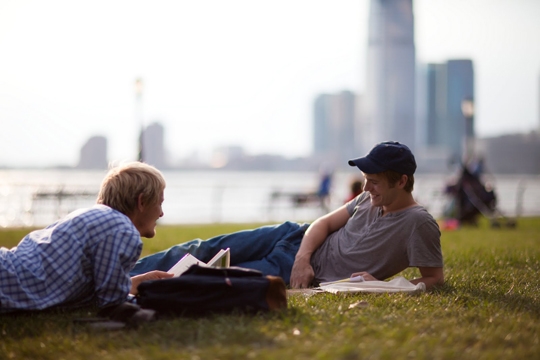 Keep The Lights On

Manhattan in 1998. A semi-clad man lies on a bed dialling different phone numbers until he finds a suitable date for sex. When Erik first meets his date Paul the encounter unleashes a passion that at first appears to have no future. Nonetheless, two years later, the two men are sharing an apartment and their lives. Erik is a documentary filmmaker and Paul is an attorney who works regular hours. But the closeted, emotionally unstable Paul is prone to overdoing things. In between conversations, sex and drugs the pair struggles to create a life together but time and again their compulsions and addictions cause the relationship to run off the rails. Nonetheless, neither of them wants to give up and both are prepared to fight for their happiness together. From the word go director Ira Sachs approaches his depiction of this couple with an intimacy that is both honest and unflinching. The growing instability of their life together provides the viewer with an unsparing portrait of the nature of relationships in our times. In addition, the film allows us to rediscover two exceptional albeit forgotten actors: photographer and filmmaker Avery Willard and singer-composer Arthur Russell, whose stirring, sensual, score provides Erik’s musical leitmotiv.

Born in Memphis, USA in 1965, Sachs’ work has already screened in the Berlinale Panorama section in 2005 with FORTY SHADES OF BLUE, in 2010 with LAST ADDRESS and in 2012 with KEEP THE LIGHTS ON which won the Teddy Award. In 2013 he was a recipient of a Guggenheim Fellowship.