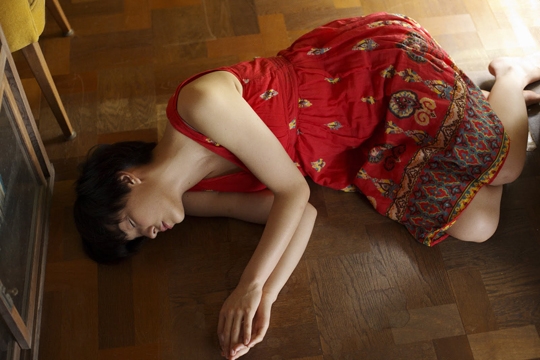 Schoolgirl Tsubara is oddly obsessed with her biology teacher Madoka. While the rest of the class responds to their instructor’s lack of authority with clamour and inattention, she hangs on his every word, filling her notebook with sketches and observations to record his quirks and peculiarities. One day, she finally takes the plunge and pounces on Madoka in his office, which results in the two of them inexplicably exchanging their sexual organs. They head to the country to hide, but are soon discovered by two of Tsubara’s schoolmates: En, who is secretly in love with her, followed by En’s own persistent admirer Maru. KOI NI ITARU YAMAI employs cheeky wit and a great deal of originality to upend the clichés of the Japanese schoolgirl genre, finally allowing its four protagonists to cavort together in a quirky choreography. The central characters’ names represent different readings of the Japanese character for “circle”. Young director Kimura Shoko’s directorial debut is without question a lovers’ circle of a truly curious nature: queer, jarring and surprisingly serious at the same time. (Christoph Terhechte)

Born on 10 August 1986 in the Ibaraki Prefecture in Japan. She studied Film at the Musashino Art University's Imaging Arts and Sciences Faculty. Her graduation film ORDINARY LOVE was presented at the Pia Film Festival in 2009 and won the Special Jury Award.