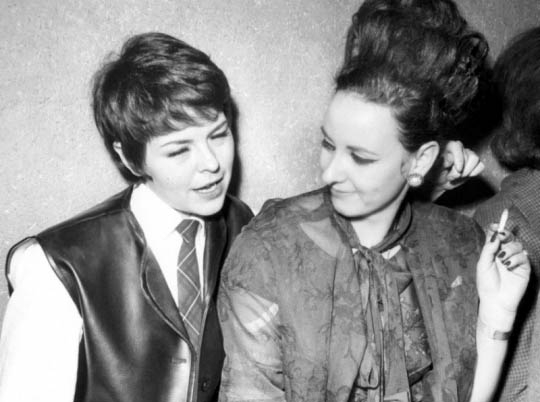 Stories of women who love women: their relationships and international networks, their search for identity and their – often secret – meeting places. Five women in Switzerland from different generations look back on their lives. A collage of personal memoirs and historical events, anecdotes and documentary material that wryly illuminates the particular atmosphere of each period and provides a subtly differentiated picture of ‘otherness’. Cosmopolitan Johanna Berends, chronicler and photographer Liva Tresch, well-known fashion designer Ursula Rodel and committed feminist Heidi Oberli take us back to their often adventurous early years. These women belong to very different generations; their testimonies help us to understand what made their particular era so special, particularly in comparison to the present day, where it is possible for Samira Zingaro to study and move about freely within an open lesbian community. Nowadays, homosexuality is a regular feature of almost every television soap. But what did it mean to love a woman when the word ‘lesbian’ did not even exist? And what was it like in the days when women didn’t ‘come out’ because they didn’t know their feelings had anything to do with lesbianism? Women who loved women existed long before the rest of society began to take an interest. During the 1940s and 1950s they made their mark on Switzerland’s urban bohemian society where there was a flourishing homosexual subculture. During the 1970s and 1980s, lesbians joined forces with politically active heterosexual women to carve out a feminist counter-culture, without which, contemporary Swiss society would be very different. This film embarks upon a cultural and historical journey through time providing an upbeat insight into the past century from the perspective of a minority long hidden from view.

Born in Spiez in Switzerland in 1948, she studied art history, classical archaeology and journalism at Bern University. She organised cultural events and congresses and also ran an alternative cinema from 1988-99, later managing the “Cosmos” cinema in Bern from 1997-99. She was one of the initiators of the Swiss women’s film festival “FrauenFilmTage” and the Bern gay and lesbian film festival, “Queersicht”.