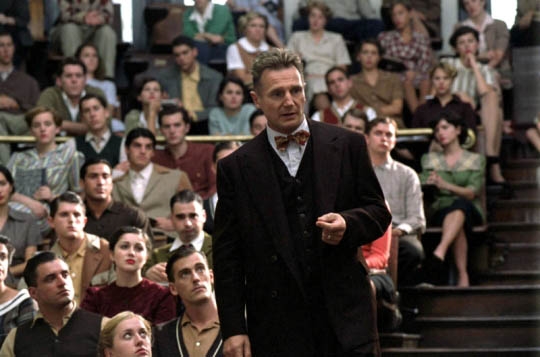 On January 5, 1948, American culture changed profoundly. On this day, Alfred Kinsey’s “Sexual Behavior in the Human Male” was published by W.B. Sanders, a company specializing in medicine. In a way, this also marked the day on which America began to talk about sex. At the time, Alfred Kinsey (1894-1956) was dubbed the “American Freud” and compared to the philosophers of the Enlightenment, such as Galileo and Darwin. Kinsey was a controversial figure even in those days – and has remained so until today. Raised under the thumb of his conservative father, years of illness weaken the young Alfred as a child; only after he discovers nature and begins observing animals, does his health improve. He studies biology and psychology, does his doctorate at Harvard and then, at the University of Indiana, becomes an eminent authority on the gall wasp, a small insect rich in variety. This unwordly and rather quirky man gradually loosens up during the course of his marriage to Clara Bracken McMillen. Overcoming their initial problems in bed, the couple have three children. One day after being confronted with the sexual problems of a married couple seeking advice, this gall wasp expert comes to realize the enormity of science’s deficits in this area. He initiates a debate on sexuality at his university and distributes questionnaires to students. But it is not until he conducts interviews in collaboration with his favourite student Clyde Martin that he obtains usable findings. But the study does not end with just a theoretical examination of the topic: Kinsey and Martin begin a short affair – and the young man also sleeps with the sex researcher’s wife. Funded by the Rockefeller Foundation, Kinsey is appointed director of an institute for sex research. But, in the midst of all these professional successes, his own life goes haywire…

Born in New York on 22.10.1955, he attended Regis High School and studied philosophy at Columbia University. After graduating, he worked as a film journalist and co-author of two thrillers by director Michael Laughlin, before making his directorial debut with SISTER, SISTER. In 1999 he received an Oscar for the screenplay of GODS AND MONSTERS, his bio-pic about James Whale, the director of FRANKENSTEIN. He is currently on the board of the Los Angeles Film Festival and a member of the Writers Guild of America.