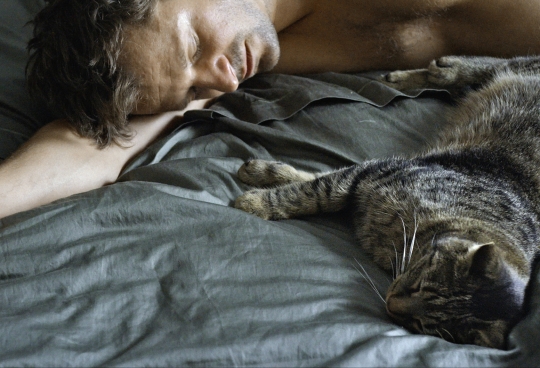 Andreas and Stefan live a blissful existence together with their tomcat, Moses. They inhabit a beautiful old house in the vineyards near Vienna and work in the same orchestra as manager and musician. Their passion for music, their large circle of friends and colleagues and their furry companion define the daily lives of the two men. But one morning an unexpected outburst of violence from Stefan shakes their harmonious relationship to its core. From this moment on, scepticism and alienation define their cohabitation and represent an almost insurmountable obstacle. While Stefan is losing the ground beneath his feet, Andreas struggles with his mistrust and his love for Stefan. Following his award-winning debut März (March), in his second film Händl Klaus portrays the expulsion of two lovers from paradise. Demonstrating exceptional sensitivity for the male psyche and for the blind spots in all our personalities, this artistic and poetic ballad tells of the fragility of love. Actors Philipp Hochmair and Lukas Turtur are both born theatre thespians and their naturalistic screen performances are impressive.