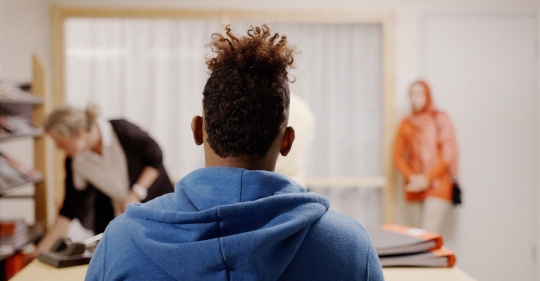 The sea. High waves. Dark water. A border fence, two men in hiding. Their flight begins. Only one of them will reach Sweden.  One of the men is played by Abdi Aziis, who himself has fled from Somalia to Sweden in order to escape the oppression and persecution of gay men. “He is our comet” explains director Victor Lindgren, who, in merely a few selected situations, manages to convey the exertions, the deep abyss, the arrival and the loneliness of those who flee. Both men lay alongside each other on a bench, one arm extended across the other’s belly – an image that symbolizes their intimacy, their shared experience. And in the next moment it’s all gone. Forever. How can life go on? Victor Lindgren’s film Ta av mig was conferred with a TEDDY Award for Best Short Film at the 2013 Berlinale.

Born in Holmsund, Sweden in 1984, he has been working in film and television since high school and is one of the co-owners of Bautafilm production company. He teaches filmmaking to children at festivals and in schools.