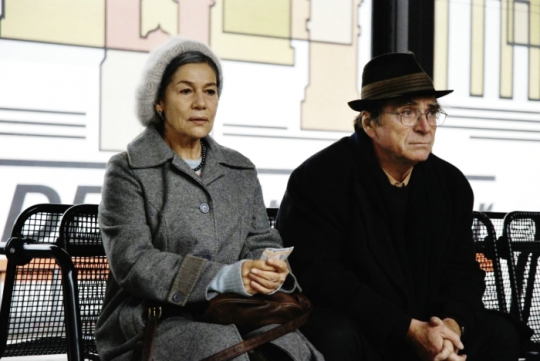 A story of selfless love that is also a poetic journey into the meaning of life itself. Trudi is the only one who knows that her husband is terminally ill with cancer. When his doctor suggests that the couple undertake one last trip together, Trudi persuades her husband to accompany her to visit her children and grandchildren in Berlin. However, the members of their family are far too wrapped up in their own lives to be able to take care of the couple. After a theatre trip to see a Butoh dance performance, Trudi and Rudi decide to go and stay at a hotel on the Baltic coast. And then, out of the blue, Trudi dies. Rudi is completely at a loss. He has no idea what to do with his life, until he decides to go to Japan to visit their youngest son, Karl.

Doris Dörrie: ”KIRSCHBLÜTEN – HANAMI is inspired by Ozu’s 1953 film, TOKYO MONOGATARI (TOKYO STORY), which, in turn, was a reworked version of Leo McCarey’s American film MAKE WAY FOR TOMORROW (1937). In this way, a story that originated in the West went East, and is now travelling back again from East to West. Inspired by the initial constellation in Ozu’s film, I developed the story of a widower father who travels from Germany to Ozu’s native land where he finds somebody – a young Butho dancer named Yu – who is able to accept him in spite of the fact that they don’t even have a language in common.”

Born in Hanover on 26.5.1955, she studied acting and film at the University of the Pacific in Stockton, California, and philosophy and psychology in New York. From 1975-78 she studied at the College of Television and Film in Munich, where she later lectured. After several TV films, she made her first feature film 1983. She enjoyed outstanding success with her 1985 film, MÄNNER. A well-known author of novels, short stories and children’s books, in 2001 and 2003 respectively she directed productions of “Cosi fan tutte“, and “Turandot“ for the Berliner Staatsoper.