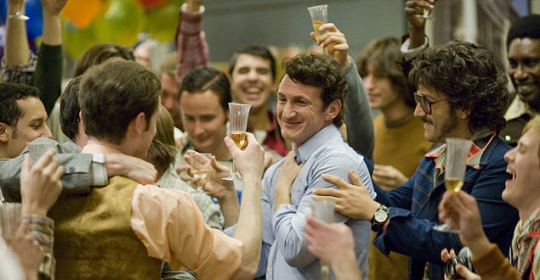 Gay Rights Activist. Friend. Lover. Unifier. Politician. Fighter. Icon. Inspiration. Hero. His life changed history, and his courage changed lives. In 1977, Harvey Milk was elected to the San Francisco Board of Supervisors, becoming the first openly gay man to be voted into a major public office in America. His victory was not just a victory for gay rights: he forged coalitions across the political spectrum. From senior citizens to union workers, Harvey Milk transformed the very nature of what it meant to be a fighter for human rights, and before his untimely and violent death in 1978, became a hero to all Americans.
Harvey Milk has been the subject of several books and the Academy Awardwinning documentary feature by Rob Epstein, THE TIMES OF HARVEY MILK (1984); but MILK is the first fictional feature to explore the private aspects of his personal life and career.
Academy Award winner Sean Penn stars as Harvey Milk (and won his second Academy Award for this part) under the direction of Academy Award nominee and TEDDY AWARD winner Gus Van Sant, filmed on location in San Francisco, based on an original screenplay by Dustin Lance Black (who won an academy award in 2009 for MILK); produced by Academy Award winners Dan Jinks and Bruce Cohen (AMERICAN BEAUTY).