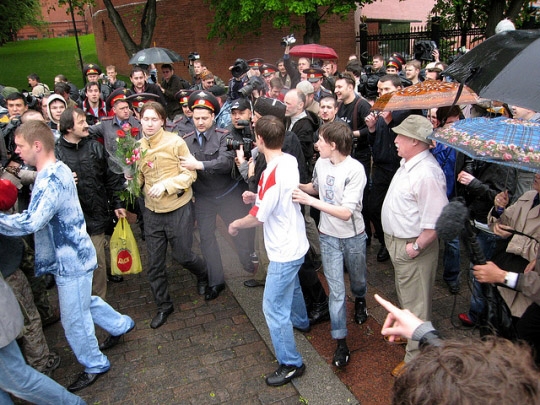 This is the official documentary record of the first Christopher Street Day celebration in Moscow. The events that took place in May 2006 included a CSD parade, which garnered international attention not least because Moscow's mayor Yuri Luzhkov had tried to ban it. This film shows not only the procession that, followed by international guests and observers, made its way through the centre of Moscow from the Unknown Soldier's Memorial on 27 May, 2006, it also contains footage of a three-day festival that drew attention to the discrimination experienced by gays and lesbians in Russia. In addition, the film mentions a series of seminars, lectures, and gay and lesbian cultural events, some of which could only take place in great secrecy. The pressures to which gays and lesbians are exposed in Russia was unexpectedly made clear during the CSD demonstration when German MP Volker Beck (from the Bündnis90/Green Party) was assaulted and injured by right-wing extremist counter-demonstrators in front of Moscow's town hall. Millions of television viewers all over the world witnessed these attacks. Footage of the assault is now being used as evidence in proceedings against the Russian Federation currently being held before the European Court of Human Rights in Strasbourg.

Born in Moscow in 1945, he graduated as a director of the documentaries at Moscow's film-school (VGIK). From 1977-1980 he made 20 commercials for the Soviet Union's Ministry of Foreign Trade. From 1981 he worked at The Film-Studio, where he produced popular science, documentaries films. During this time he directed over 35 documentaries, largely about the cosmos.