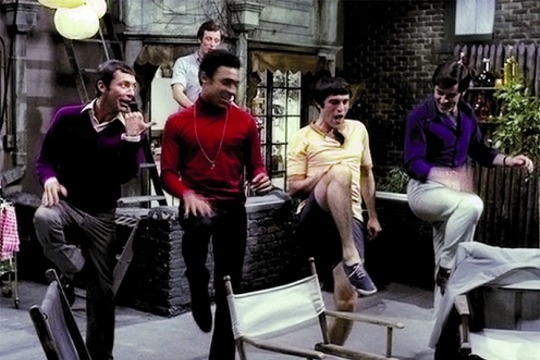 Mart Crowley’s "The Boys in the Band" (1968) belongs to the seminal artistic works for the gay community. For the first time gay men were not presented as victims or pathetic losers, loners or as societal waste, but rather as people like you and I. Together with Mart Crowley, who leads the audience through fireworks of historical film snippets and interview bits, Crayton Robey traces the phenomenon of success and the protagonists of that time.

Nobody could have predicted it. Never before had there been a popular stage play featuring openly gay characters. But then, for such a play to become a huge hit in New York in 1968 was nothing short of sensational. The Broadway premiere of “The Boys in the Band” on 14 April, 1968 was
followed by no less than 1,001 performances and its young playwright, Mart Crowley, who had previously worked in television on the west coast, instantly became a much sought-after writer.
“The Boys in the Band” was the right play at the right time. If it had appeared a little earlier or a year later it would never have had the same impact. Mart Crowley would never have dreamed of penning lines like: “who do you have to fuck to get a drink around here?” that are still to be heard at parties today. By the time William Friedkin’s screen adaptation THE BOYS IN THE BAND was released in cinemas, the play and its protagonists were definitely a part of mainstream culture.
Crayton Robey: “Mart Crowley is a personal hero of mine. During my coming out years, the writings of James Baldwin, Langston Hughes and ‘The Boys in the Band’ were the reference materials that informed me about gay life. I finally got to meet Mart when I interviewed him for my debut documentary WHEN OCEAN MEETS SKY. Following the interview, Mart enthusiastically agreed to share his thoughts and personal archive with me, leaving me in this unique position to create a documentary that captures, from stage to film, the ground-breaking making of ‘The Boys in the Band’.”

A native of Houston, Texas, and a graduate of Howard University, Crayton Robey made his directorial debut with the award-winning documentary, When Ocean Meets Sky, a historical chronicle of the iconic gay beach resort, Fire Island Pines. The film premiered at the 2004 South by Southwest Film Festival and won the Best Documentary Award at the 2004 Dallas OUT TAKES, and later broadcast on the MTV Logo Network.