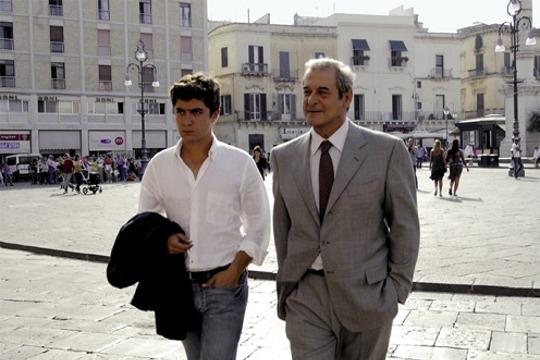 Tommaso is the youngest member of a large family of pasta-makers in Puglia. The Cantone family includes the mother, Stefania, a caring woman who is nonetheless trapped by middle-class conventions; the irascible father Vincenzo, who has high hopes for his progeny; the rather eccentric Aunt Luciana; the rebellious grandmother, who still yearns for her lost love; Tommaso’s sister Elena, a frustrated housewife, and his brother, Antonio, who works at the pasta factory.
Today the clan has come together for a special family meal to celebrate handing over the factory’s management to Antonio. Tommaso has decided to make use of the gathering to finally announce to his unsuspecting family that he’s gay. The atmosphere is festive, the family are all seated around the table, Tommaso is just about to open his mouth when Antonio steals his thunder. To everyone’s great surprise and to the general horror of the family – Antonio reveals that he’s gay. Beside himself with rage to learn that his first born and future successor loves men, Vincenzo throws Antonio out of the house, swearing never to have anything to do with him again. After this outburst he collapses in a heap in front of his speechless family.
And so the management of the pasta factory falls to Tommaso, who had quite different plans for himself. He misses his partner and his life in Rome – but how can he tell his family the truth without putting his father’s life at risk? But then, his Roman friends decide to pay him a surprise visit in Puglia …