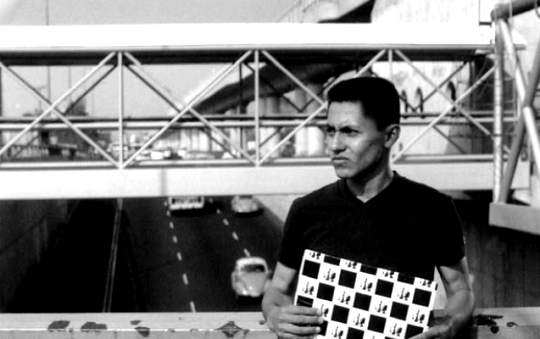 17-year-old Gerardo and his friend Bruno have split up. Gerardo finds himself wandering aimlessly about the streets of Mexico City. As he meanders, he is tortured by images: every male body he sees rekindles memories of his lover, who is with him once again in his imagination. However, his wet dreams do not alleviate his suffering, nor does masturbation provide him with any kind of relief. Even his brief, surprising sexual encounters with strangers can’t help him get over the pain of his loss. Now that Bruno has left him, Gerardo is determined to keep what’s left of their dead love for himself – but this is like trying to reach out for the clouds scudding past in the sky. Gerardo’s only comfort is a letter he discovers in the rubbish – the fact that it has nothing to do with him is something he refuses to accept. Gerardo’s pain has made him impervious to the realities of his environment. Before long, he can only perceive others as reflections of his own wounded, decimated ego. The affairs and opinions of others are of no interest to him and even his friends are not able to open his eyes to the truth. Gerard constructs a tower of loneliness in which he is determined to preserve his desire for Bruno from the onslaught of the real world. He is holding on to the fantasy images of his erstwhile love in an endless farewell, in a vast, endless city.

Julián Hernández (born 1972 in Mexico City, Mexico as Julián Hernández Pérez) is a Mexican multi-awarded filmmaker. He won twice the Teddy Award at Berlin Film Festival with his movies Thousand Clouds of Peace Fence the Sky, Love, Your Being Love Will Never End (2003), and Raging Sun, Raging Sky (2009). He studied at the Centro Universitario de Estudios Cinematográficos (CUEC), from where he was expelled due to his gay-themed films during a homophobic administration, and was not mentioned as a serious director until he started winning international recognition. He has credited his use of cinematographic language to influences from filmmakers such as Michelangelo Antonioni, Leonardo Favio, Robert Bresson, and Alain Resnais. Hernández has directed more than 20 awarded short films (both documentaries and fictional), and became a gay-cinema icon for his feature films, including Broken Sky. Along with producer and director Roberto Fiesco, he founded Cooperativa Cinematográfica Morelos. which later became the prestigious production company Mil Nubes Cine, producing 29 films over two decades.