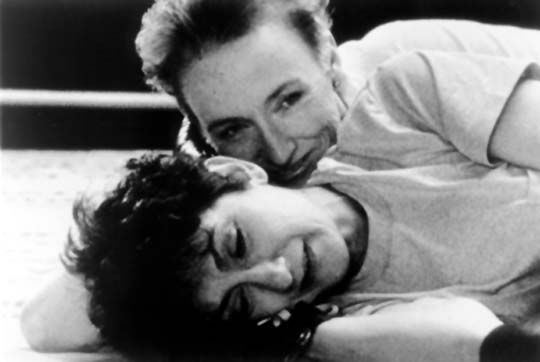 Doris and Mildred are two white women, one in her mid-50s and the other in her early 60's, who become lovers and decide to set up housekeeping together. Mildred is the younger of the two, a lesbian for most of her adult life, and of upper-middle class origin. She is a tenured professor in the Department of Women's Studies at a large University. Doris, in contrast, never attended college, has never had a steady job or predictable income, and has raised Flo, her grown daughter, single-handedly. Now, trying to be a performance artist, she finds herself in love with a woman for the first time in her life. Mildred shops at Barney's; Doris plunders catalogues and thrift shops. Told mainly from Doris' perspective, MURDER AND MURDER investigates the pleasures, uncertainties and ambiguities of later-life emotional attachment and lesbian identity in a culture that glorifies heterosexual romance. A parallel narrative unfolds via the commentary and presence of three other characters. Director Yvonne Rainer periodically pops up in the film to trouble the narrative with the asymetries of her mastectomised chest and inquiries into the politics of breast cancer. Her role dovetails that of Doris, who also undergoes a mastectomy. Jenny, Doris' mother and Young Mildred, Mildred's 18-year-old self, are ghosts from the past, invisible to the protagonists but haunting the film's present. MURDER AND MURDER - insofar as it deals with lesbian sexuality, female aging and breast cancer, sets in motion an unholy grouping that reflects popular misconceptions and medical bias about disease; both articulating and critiquing these culturally and scientifically determined notions. Through humour, slapstick, visual metaphor, drama, quotations, commentary and Rainer's characteristic panoply of formal and discursive strategies, notions of pathology are successively invoked and dismantled. Sometimes uncomfortable, always emotionally courageous and intellectually challenging, MURDER AND MURDER is at once soap opera, black comedy, love story and political meditation.

The Purple Rose of Soho
Rainer is the avant-garde's most important woman filmmaker since Maya Deren... more likely, she's the most influential American avant-garde filmmaker of the past dozen years, with an impact as evident in London or Berlin as in New York... That Rainer's work engages that of Godard and Brakhage, arguably the two most powerfully original filmmakers of the past 30 years, is another measure of her centrality. But addicted as she is to the life of her times, it seems perverse to segregate Rainer in an avant-garde ghetto. The relationship of psychodrama to the films of actor-auteurs like Charlie Chaplin or Barbra Streisand is a fallow field for academics. Nevertheless, it's apparent that Rainer has many points of contact with her fellow toiler in the vineyards of urban sophistication, Woody Allen.

(...) It is the first time - after plunging into the production of experimental films in 1972 - that former choreographer Yvonne Rainer has created real characters without compromising either her radical approach nor her sense of humour. The filmmaker appears, fragile and ambiguous, dressed in a tuxedo. At one point she unbuttons her dinnerjacket to show where her breast has been amputated: a wonderful gesture beyond shamelessness or pathos. It shows that Yvonne Rainer even locates a more accessible film on the site of her body, which she has always used as a 'site of scandal' since her early experimental films. The constructive scandal of MURDER AND MURDER is the fact that this body, marked by old age and the threat of death by cancer, dares to love, even love beyond the conventional norms.