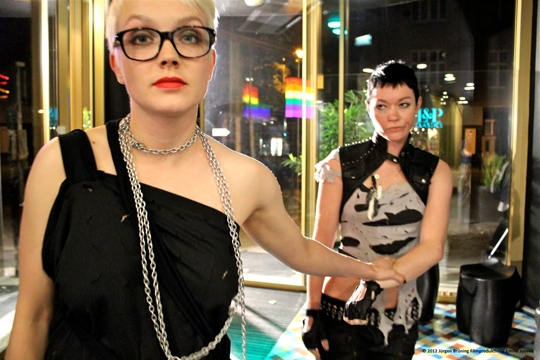 Claudine and Dylan enjoy a happy relationship for the most part. But Dylan in particular is convinced that queer Berlin must surely have more to offer than monogamous lesbianism. And so the women decide to set off on a journey of discovery: Dylan discovers a new sex club where friendly young women help her to chart her own erotic map. Claudine becomes Claude and, at the hotel where she works, meets mature attractive Helen with whom she explores a new approach to love. Being with Claude makes Helen almost forget that she only came to Berlin to take her revenge on her sexually jaded husband Hans and to see how her daughter Dylan is getting along. In the film’s grand finale, everything and (almost) everyone end up in a hotel bed...

Born in Monrovia, Liberia, in 1966. After graduating from Rutgers University’s Mason Gross School of the Arts in New Jersey, she began making films in which she also played the leading role. She first took part in the Berlinale’s Panorama section with her 1995 work GREETINGS FROM AFRICA. In 1996 she received a Teddy Award for THE WATERMELON WOMAN. She is currently teaching at Temple University’s Department of Film and Media Arts.