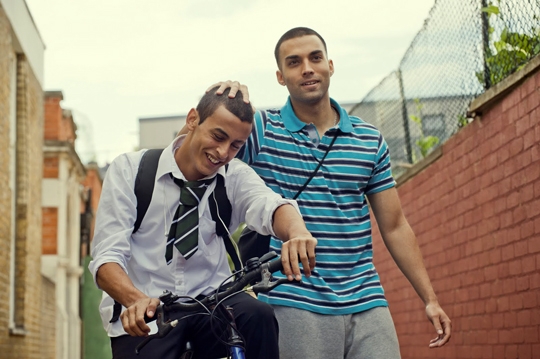 My Brother The Devil

A story about two Arab brothers living in the dismal London borough of Hackney. Sensitive fourteen-year-old Mo idolises his nineteen-year-old brother Rashid who is able to support the family as a shrewd businessman and member of a gang of drug dealers. Rashid hopes that his younger brother Mo will choose a different path in life. When a rival gang stabs to death his best friend, Rashid begins to ask himself some hard questions about the life he is leading. An encounter with a photographer named Sayyid opens up a whole new world and new possibilities. When Rashid’s gang notice this change in one of their own they are full of suspicion. Feeling betrayed by Rashid, Mo soon becomes delinquent, and his whole world collapses when he discovers that his adored brother is gay. In order to protect himself and Rashid he claims that Rashid and Sayyid are involved in a jihadist plot. No sooner does the gang discover the truth than they are baying for Rashid’s blood. Mo will have to face his own prejudices if he wants to save his brother’s life.
Authentic, fast-paced and atmospheric, MY BROTHER THE DEVIL is a coming-of-age story about the love between two brothers who must find themselves and their own way in life.