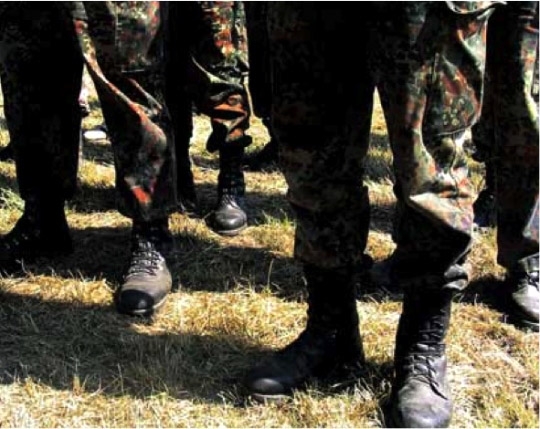 Since its inception, the homosexual movement has always numbered gays whose political leanings tend towards the extreme right; these are men who set great store by masculinity and nationalism, who look down on ‘fairies’ and women and propagate anti-Semitism. Writing shortly before his death from Aids at the end of the 1980s, neo-Nazi Michael Kühnen claimed that gay men made better fighters, because having no family made them more independent and braver. My documentary portrays gay men who describe themselves as right-wing, or who have a history of alignment with the extreme right. Andre is a skinhead. He associates with a group of other bald-headed right-wing men, most of whom tolerate his being gay. Alexander Schlesinger is a member of a political party representing extreme right-wing views. He claims that his party’s chief is aware of his homosexuality. Bernd Ewald Althans, who gained a reputation for his film, PROFESSION: NEONAZI, did time for his denial of the Holocaust. Today, he organises gay parties in Berlin. For nine years, Jörg Fischer was an active member of the extreme right-wing parties NPD and DVU. During this time he had a relationship with another male party member which lasted four years. He left these organisations in 1991 and now works as a journalist. Journalist Rainer Fromm estimates that 10–15% of neo-Nazi party leadership is gay and that their homosexuality is tolerated within the party. Some may be shocked that I do not take a stand in my film and do not portray gay neo-Nazis as monsters, but as people living their lives in dramatic contradiction. Professor Rüdiger Lautmann provides the most conclusive explanation: “Gays have always been persecuted, in all political parties, all religions and all societies. There is no reason why gay men should not affiliate themselves with right-wing groups – for the fear of being discovered and punished was, and still is, almost the same everywhere. "