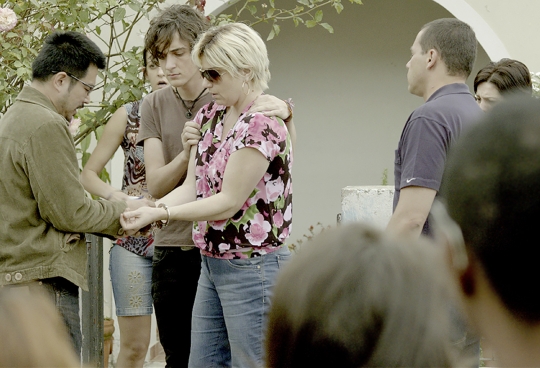 Pierre is seventeen and in the middle of puberty. He plays in a band, has sex at parties and secretly tries on women’s clothing and lipstick in front of a mirror. Ever since his father’s death, his mother Aracy has looked after him and his younger sister Jacqueline, spoiling them both. But when he discovers that she stole him from a hospital when he was a new born baby, Pierre’s life changes dramatically. Overnight, his world falls apart and his mother Aracy is arrested. His biological parents Gloria and Matheus have spent seventeen years searching for him; they are now desperate to make up for the lost years and spend time with their eldest son, whom they call Felipe. Observed from a critical distance by his younger brother Joca, Pierre/Felipe moves in with his well-heeled new family, who are determined to mould him according to their ideals. But Pierre has his own designs for his life. Director Anna Muylaert won the Panorama Audience Award in 2015 for Que horas ela volta? (The Second Mother). In her new work she explores the mother-child relationship through the eyes of a rebellious son whose whole world unravels overnight.

Born in São Paulo, Brazil in 1964, between 1980 and 1984 she studied art and communication at the University of São Paulo. She then worked as a film critic and for Brazilian television. Her short films successfully screened at festivals in the 1990s; she has since directed four feature films which have won a number of awards. In 2015, her film QUE HORAS ELA VOLTA? (THE SECOND MOTHER) won the Panorama Audience Award.