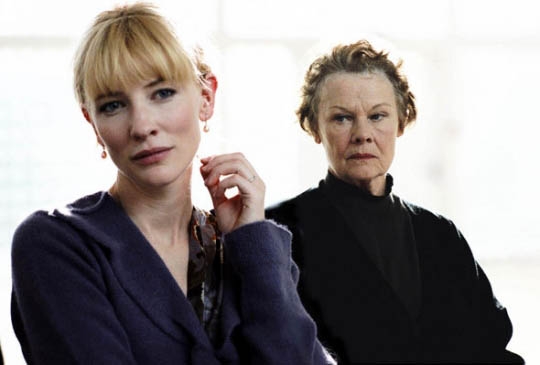 Notes On A Scandal

Barbara Covett is a domineering, nonetheless lonely teacher who has worked for years at a shabby state school in London. Ruling her class with an iron fist, the only creature to whom she feels an attachment is her cat, Portia. Otherwise Barbara lives alone; she has neither friends nor confidante. All the things that make her happy or sad are committed solely, and more or less faithfully, to her diary. Then one day a young art teacher named Sheba Hart joins the school. All at once, Barbara believes that, now, at long last, she has found her longed for kindred spirit and intimate friend. Sheba is open-minded, emotional and fragile; married with two children, she seems to enjoy a happy relationship with her husband. She has, it would appear, no need for Barbara's affection. However, Barbara's day dawns when she comes across the art teacher having sex with a 15-year-old pupil named Steven Connolly. At the discovery of this scandalous affair, the two women's friendship takes an alarming turn. Believing herself to have a powerful card in her hand, Barbara foists herself on Sheba's life, demanding that she put an end to her misalliance and transfer her attentions instead to Barbara. When Sheba refuses to meet her de mands, Barbara openly threatens to reveal her secret to the world - and Sheba's husband Richard in particular. A tense psychological battle bet ween the two women ensues...

Eyre studied at the University of Cambridge. He began his working life as an actor. After directing a successful play at the Phoenix Theatre, Leicester, he subsequently focussed on direction. Eyre was associate director at the Royal Lyceum, Edinburgh, and ran the Nottingham Playhouse before being appointed Director of the National Theatre, a role he held 1988–97. NT productions of that period included Guys and Dolls, The Beggar’s Opera, Hamlet, Racing Demon, Richard III, The Night of the Iguana, Sweet Bird of Youth, Skylight, King Lear and The Invention of Love.

Eyres’s theatre work has included further productions for the NT, West End and Broadway, including Long Day’s Journey Into Night, My Name is Lucy Barton, Mary Poppins, Betty Blue Eyes, The Crucible, Private Lives, Quartermaine’s Terms and Mr Foote’s Other Leg. In opera he has directed Carmen, Werther and Le nozze di Figaro for the Metropolitan Opera, New York, and Manon Lescaut for the Baden-Baden Festival and the Metropolitan Opera. Film work includes The Children Act, Iris and Notes on a Scandal, and his many television credits include King Lear and The Dresser. He has written and directed adaptations of Hedda Gabler, Ghosts and Little Eyolf for the Almeida Theatre. His four books include National Service (a journal of his time at the NT) and What Do I Know? (collected essays). Eyre has been the recipient of numerous accolades including six Oliver awards and a knighthood. He was made a Companion of Honour in 2017.