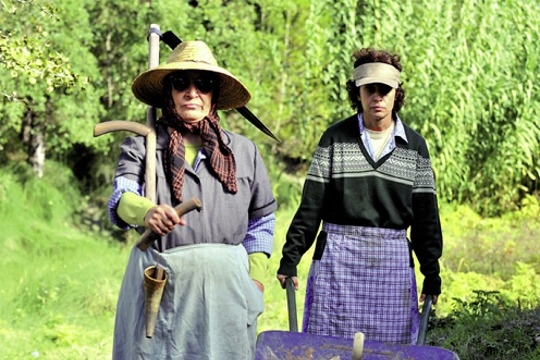 Flora is an old spinster. She lives in a small village and has spent her whole life looking after her relatives. Her only sister died young leaving Flora with three nieces to raise. As soon as they reached adulthood her nieces all left the village. Flora is beginning to worry. It’s coming to a time when the three young women should be looking after her and Flora is afraid that she’ll be carted off to the old people’s home where one of the nieces works. Her salvation is Purita, who has stood by her over the years; she is the only person whom Flora accepts as a member of the family.

Miguel Albaladejo: “NACIDAS PARA SUFRIR is a romantic comedy, but one with a very important difference: the main characters do not know that it is. Perhaps that is why the end result is more ‘comedy’ than ‘romantic’. But take note, it is romantic too. The tendency in romantic comedies is for girl to meet boy (or vice versa), girl to lose boy (or vice versa) and, finally, for girl to get boy back (or vice versa). But here things are not exactly that way. Here it is a case of mistress meets slave, mistress loses slave and, finally, mistress gets slave back (or vice versa).
Although the mistress-slave thing is not exactly that explicit. In fact, the two main characters in this story, old Flora and her servant Purita, are really just two poor women who have spent their whole lives working and making sacrifices for others.”