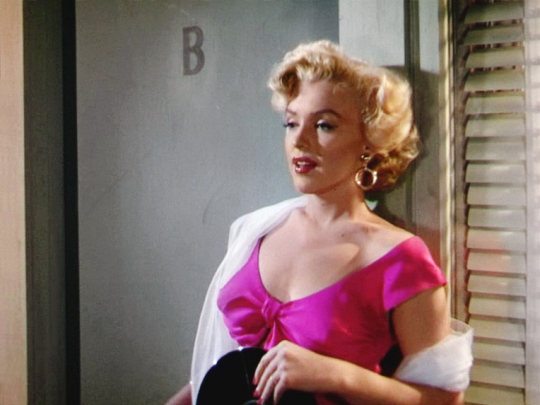 At Niagara Falls, Ray and Polly Cutler meet the Loomis. Rose is an attractive blonde with a penchant for life, her husband George an obviously depressed war veteran with a penchant for jealousy. And with good reason: Rose is actually planning to have her lover throw him off the falls ... The marriage and revenge thriller combines the low-key staging of expressionist shadows from a film noir with the glorious showmanship of a Technicolor production. Color applications already contribute to the characterization of the forces of nature in the "establishing shots": A rainbow over black rock adorns Niagara Falls; MM wears red lipstick between white sheets, and nothing else recognizable. While the natural beauty aesthetically ennobles the "Falls", the make-up discredits the woman. Even here, the film provides insight into a moral abyss that is supposed to fascinate cinema audiences just as much as Ray Cutler is fascinated by the sight of Niagara Falls: "Look, so many colors I've never heard of before!

Henry Hathaway (13 March 1898 - 11 February 1985) learned the profession of director as assistant to filmmakers such as Josef von Sternberg and Victor Fleming. In the 1920s he was assistant to the legendary monumental film Ben Hur. From 1932 he was able to direct independently and became one of the most successful directors of Western films. Hathaway was nominated for an Oscar in 1936. After 1945 he shot some of the best Hollywood thrillers of the Black Series. In the 1960's he led the Westerngenre to a new era, with movies that are considered classics today. In the course of his career Hathaway received several awards and was nominated for various prizes. In 1960 he was honored with a star on the Hollywood Walk of Fame and in 1967 he was awarded the Golden Laurel as a director.
source: wikipedia.org