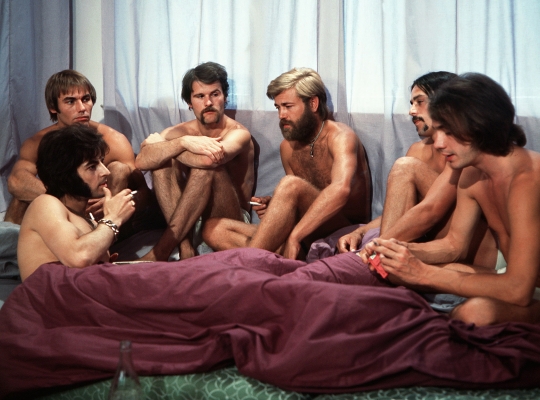 In the commentary, the word “gay” is uttered 90 times, which was still being used in the context of hate speech in 1971, two years after the abolition of Section 175 of the German criminal code, which criminalized homosexual acts between males. Those affected had not yet reclaimed the word. Delivered in a declamatory tone in voiceover to silent images showing clichéd gay scenes, the commentary provoked those unwilling to hear anything about it and those who were suffering from the use of the term in equal measure. The film’s critique, expressed from a deliberately “diffuse artistic stance” (Praunheim), mixed elements of fiction and documentary films as well as of polemics and appeal, thereby queering classical film narratives. It was directed at the gay scene itself in particular, which Praunheim accused of self-imposed invisibility. The modern German gay men’s movement developed out of the discourse on visibility triggered by the film. It is a rare example of a film that has had a direct socio-political impact.

Rosa von Praunheim @IMDb
It Is Not the Homosexual Who Is Perverse, But the Society in Which He Lives @IMDb
Trailer
Excerpt of the movie