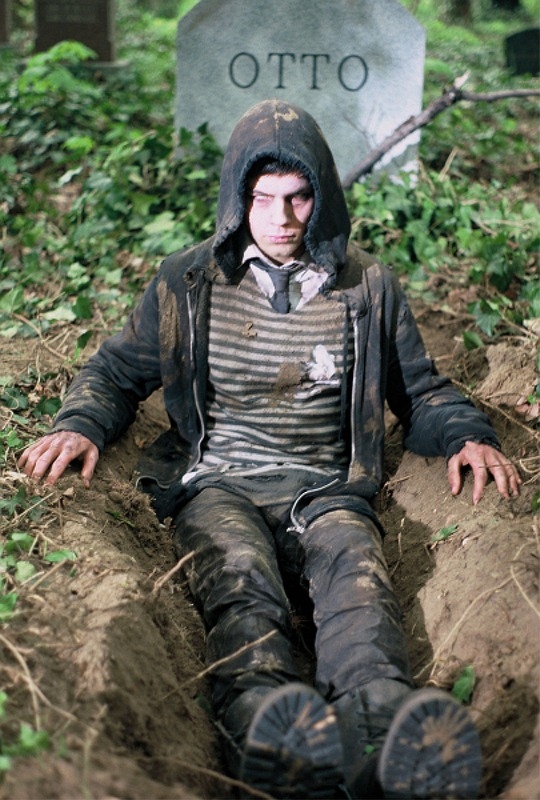 Otto; or, up with Dead People

A young zombie named Otto appears on a remote highway. He has no idea where he came from or where he is going. After hitching a ride to Berlin and nesting in an abandoned amusement park, he begins to explore the city. Soon he is discovered by underground filmmaker Medea Yarn, who begins to make a documentary about him with the support of her girlfriend, Hella Bent, and her brother Adolf, who operates the camera.
Meanwhile, Medea is trying to finish “Up with Dead People,” the epic political-porno-zombie movie that she has been working on for years. She convinces its star, Fritz Fritze, to allow the vulnerable Otto to stay in his guest bedroom. When Otto discovers that there is a wallet in his back pocket that contains information about his past, before he was dead, he begins to remember a few details, including memories of his ex-boyfriend, Rudolf. He arranges to meet him at the schoolyard where they met, with devastating results.

Born 1964 in Southampton, Canada. He attended film school in Toronto and studied film theory at York University. His film Hustler White was screened in 1996 in the Panorama and became his first international success. He has been a guest of the Berlinale several times, most recently in 2014 at Forum Expanded with Pierrot Lunaire, for which he won the Teddy Award. He has also directed numerous music videos and plays, writes and photographs for international magazines, newspapers and websites. As an artist, he has been represented in numerous international exhibitions.