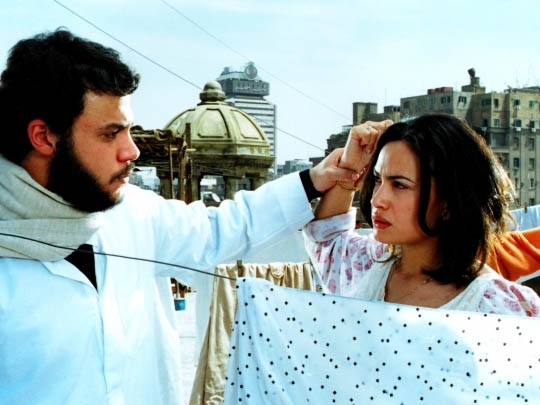 The Yacoubian Building in Cairo is still an eye-catching construction. Built in 1934 and named after the leader of the Armenian community, it was long regarded as the last word in comfort and elegance. Loosely based on a highly popular novel by Egyptian writer Alaa Al Aswani, this film portrays episodes in the lives of the people who live here. One of the building’s inhabitants is the aristocratic Zaki El Dessouki. A playboy for whom women are still his great weakness, the elderly man now holds his trysts in cheap bars. One of his assignations is his neighbour, Bothayna, a young girl from a poor background. Obliged to mess around with the owner of the shop where she works in order to feed her family, she even has to sacrifice the love of her life, Taha El Shazly, the son of the doorman at the Yacoubian Building, who ends their relationship on the spot. When his dream of attending the police academy is thwarted for financial reasons he decides instead to join a religious group. Among the building’s other inhabitants are Fanous and Malak who live in a corrugated iron hut on the roof, and Soad, who is kept by a rich patron. One other tenant is a journalist named Hatem, who is the son of a well-known lawyer. He falls in love with a soldier and makes use of his financial straits to seduce him. These artistically interwoven stories of a number of individuals also provide a vibrant but socially critical picture of contemporary Egyptian history.

Born in 1977, Marwan Hamed is an Egyptian filmmaker and director who graduated from the high institute of cinema in 1999.He worked as Assistant Director in a large number of films and commercials. While studying, he directed two short films and several documentaries but what stood out from the crowd was his 40-minute directorial debut Lilly, through which Amr Waked was also first introduced as a promising talent. Based on a short story by renowned Writer Yousef Idrees, the film was a great success garnering various international awards and was screened on various TV channels including the ARTE network. In 2006, Marwan directed his first feature film, The Yacoubian Building, which garnered several awards from prestigious international film festivals, making him the youngest director in Egypt to receive such high critical acclaim and prominence.