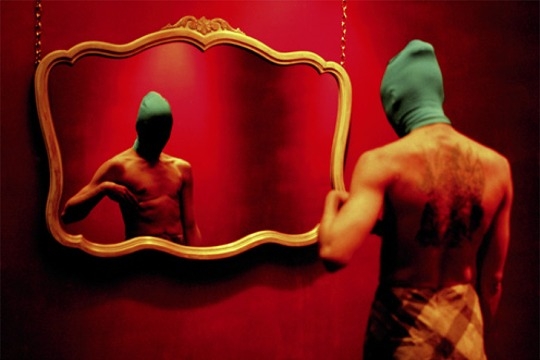 The young hermaphrodite Cynthia (Gaea Gaddy) meets Gen (Tempest Crane) and Jay (Jendeen Forberg), a couple recovering from plastic surgery. She learns of Pandrogony, in which two people merge their facial features making one unified entity from separate ones. Inspired by this, Cynthia abandons her husband and suburban life to embark on a road trip with Gen through the remnants of 20th century America. Simultaneously, a young transman meets a young punk, Nick (Daniel Luedtke), and they fall in love.

A queer road-movie-cum-transsexual romance. In his feature film debut, director Jake Yuzna spectacularly combines all kinds of gender crossing permutations.
One of the film’s protagonists is the young hermaphrodite Cynthia. It’s not until Cynthia meets Gen and Jay, a couple that has recently undergone plastic surgery enhancements, that she first hears the term pandrogony. The word is like a promise and speaks of the possibility of two people being able to merge their facial expressions in order to conquer their isolated identities and become a single entity. Cynthia is enchanted by the idea! She promptly leaves her husband and sets off with Jay and Gen on a road trip that takes her through what’s left of the American dream of the twentieth century.
At the same time, Syd, a transsexual, meets a young punk named Nick. Not only do they fall in love with each other, but Syd also falls pregnant!
OPEN is a film about hormone treatments and surgery; a film that also unveils a new kind of human being. Pioneers in the world of transcending human experience, authentic hermaphrodites and transsexuals all join forces to present on screen the possibilities that are emerging for humankind at the outset of a century that has barely begun.

For his work, Yuzna has received fellowships from Creative Capital, Jerome Foundation, Philanthrofund Foundation, Frameline Foundation, Creative Time, State Arts Board of Minnesota, IFP and the National Endowment for the Arts.

His debut feature film, Open, premiered at the Berlin Film Festival, where it became the first American film to receive the Teddy Jury Prize before garnering additional awards at NewFest, OutFest, and the Tel Aviv Film Festival.

Yuzna’s work has screened at the Cannes Film Festival, New Museum of Contemporary Art, the British Film Institute, London Film Festival, Oberhausen Film Festival, Red Cat of Los Angeles, Strelka of Russia, among others. In addition, this work has been broadcast nationally on PBS in North American and Arté in Europe.

In 2010, Yuzna founded the first cinema program at the Museum of Arts and Design in NYC. Continuing as the Director of Public Programs, he headed the institution’s experimental cultural production initiatives until 2015. These projects included the museum’s first biennial in 2014, the first American retrospective of Alejandro Jodorowsky, as well as the first publication of the education department “THE FUN: The Social Practice of Nightlife in NYC.”