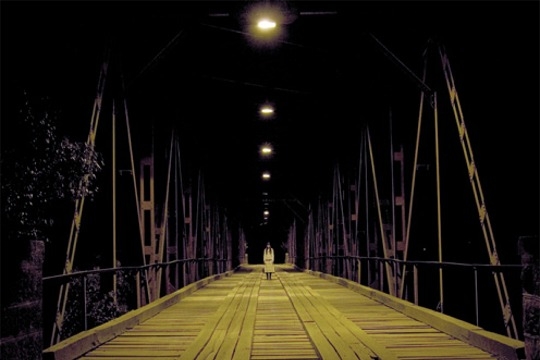 Mr Tambourine Man is the name adopted by a sixteen-year-old boy living in a Brazilian village who is a great Bob Dylan fan. His taste in music, his style and his habits make him an outsider at school. He publishes gloomy texts on his blog, smokes grass and, together with his only friend, Diego, dreams of one day seeing Bob Dylan live. Mr Tambourine Man lives in a world of his own. He’s always looking at images of the same girl on his computer, images in which a man also appears. In his daydreams he begins to live out these scenes that seem to be suffused by a mysterious death-wish. Time and again his thoughts come back to this couple. Something terrible must have happened to them. Mr Tambourine Man’s mother has given up trying to understand her son’s world. She sees his lethargy as a symptom of his puberty and hasn’t realised just how far her son has withdrawn from her and the world around him.

Esmir Filho: “I love the way teenagers think about the world. Their emotions are stronger and they’re easily seduced by the possibilities that life can bring. They start to discover a lot about themselves and try to fight against their own hidden feelings. All the situations that happened during our period of adolescence seem to be trivial when we grow up. But there was a time that they were very frightening to all of us and very clarifying too. That’s why I love to talk about teenage angst and the feeling of melancholy, rebellion, insecurity and loneliness that this period brings.”

Esmir Filho graduated from FAAP film school, São Paulo, in 2004. His first feature film "Os Famosos e os Duendes da Morte" (The Famous and the Dead), distributed in Brazil by Warner Bros, was the winner of the Rio Festival 2009; has been selected for Berlinale Generation 14+ and Locarno official competition; and won best film, direction and critics' awards at Havana, Valdivia, Granada and Guadalajara festivals. The film also premiered in theaters in France, Japan and Portugal. His short film "Alguma Coisa Assim" (Something Like That) won the best screenplay award at Festival de Cannes 2006, while "Saliva" was the short film nominated to represent Brazil to run for the Oscars 2008. In 2011, he founded the producer company Saliva Shots, where he's been developing and producing audiovisual content for cinema, TV, and internet. He directed the multimedia piece "Kollwitzstrasse 52", combining cinema and theater, which was on show at the Museum of Image and Sound of São Paulo. He is currently in pre-production of his next long feature "Baleia (Whale)" and developing the script of "Madeira de Lei" (Hardwood), a thriller settled in the Amazon Forest.