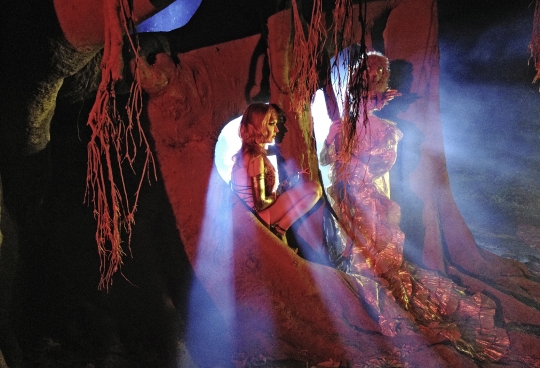 In the latest of her series of portraits of legendary underground performers, Marie Losier takes us into the world of Fernando, aka Deborah Krystal, the glittering and poetic performer of the Lisbon club Finalmente. Over the last thirty years, Fernando has been performing every night at Finalmente, dressed in golden gowns. O Pássaro da Noite reveals the many skins of Fernando that lay underneath the layers of his colorful fabrics, and – with the help of a large cast of friends and filmmaking colleagues – lets Lisbon’s legends come to life. Alternating and shape shifting between manifestations as mermaid, bird, and lion, Fernando takes us on a journey into the desires and dreams of metamorphosis and myth: From the bright sunlight of a colorful beach to the haunted shadows of a museum at night.

Marie Losier, born in 1972 in France, is a filmmaker based in New York. She first studied literature at the University of Nanterre, France, and then Fine Arts in New York City, where she also worked as a film curator. Marie Losier has made a number of film portraits of avant- garde directors, musicians, and composers, such as Mike and George Kuchar, Guy Maddin, Richard Foreman, and Tony Conrad. She has also performed in films by George Kuchar, Mike Kuchar, and Jackie Raynal, and in plays by Juliana Francis and Tony Torn. Currently she's working on a new film about Cassandro. Her films and videos have been shown at museums, galleries, biennials, and festivals.