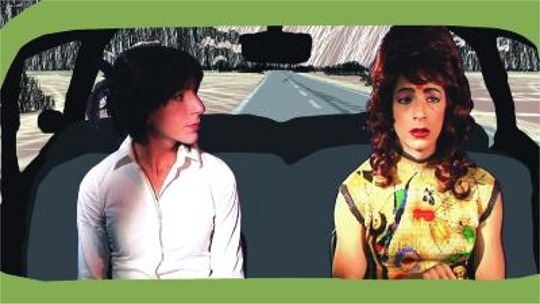 One Hand On Open

In an institute for violence studies, Tracey Niles struggles to reconnect with her lost memory. She is haunted by a silhouette. The image of a perpetrator? To whom she fell victim? The current institute director, Reena Chandrakali, is leading a "self-defense against hate violence" campaign for the distribution of firearms throughout "sexual minority" communities. Faith Eatherton is developing a philosophical treatise: "Dissipated: Reaching for the Bodyless." Her discovery of Tracey's true past casts doubt in her mind about her own function within the institute and about Chandrakali's representational politics.
Harnessing the forces of memory, representation and becoming, these three figures are determined to find satisfaction according to their changing attractions and desires, some which lead to one-another and some which lead into the open.

The filmmakers, Stefan Pente and William Wheeler (smoking mirror), collaborated on the directing, camerawork, acting, animation, etc. for one hand on open, shooting entirely in a blue box studio. The film places real actors in an animated environment. Pente and Wheeler’s approach to animation embraces emptiness as potential.
The all-trans-gender cast of characters must come to terms with their unstable situations somewhere between a vast openness and individual isolated projections.

Stefan Pente (* 1964 in Zurich) is a sculptor, director, film producer, cameraman and actor. Pente trained as a nurse in a psychiatric clinic. From 1992 to 1994 he studied at the further education class for fine arts at the Zurich School of Design. Since 1995 he has lived and worked mainly in Berlin.

In his art, Pente poses questions about identity formation through descriptions, classifications and categorizations. With sculpture, installations and performances "as far beyond the linguistically conceivable as possible, he questions the necessity and motivation for the depictions and descriptions of the exotic Other".

In 2017 he was the winner of the Villa Romana Prize.

William Wheeler is an American writer and producer best known for his work on the TV series Ray Donovan. Wheeler made his writing debut in 2000 with the movie The Prime Gig. He has since then worked on the movies The Hoax (2006), The Reluctant Fundamentalist (2012), and Queen of Katwe (2016).