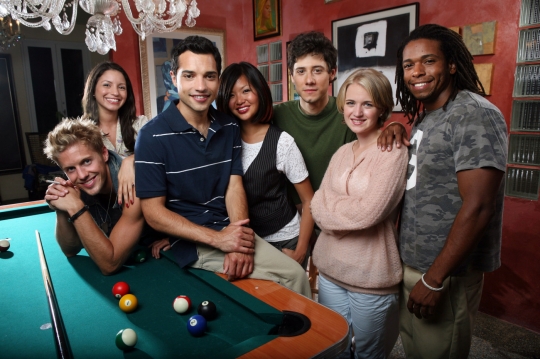 PEDRO is based on the true-life story of Pedro Zamora, a Cuban-American who shared his experience living life to the fullest, despite being diagnosed as HIV positive at a young age. When he discovered he was HIV positive, he dedicated the rest of his life to speaking out about his condition to raise awareness in his community; even testifying before the U.S. Congress to argue for more HIV/AIDS
educational programs aimed at youth of colour. He gained nationwide attention in 1994 as a cast member of the MTV-Show THE REAL WORLD. When the director of the film saw Pedro on TV the first time: "Like the rest of the country, I was mesmerised by his story. My vision for PEDRO was to tell his story with the same level of passion and honesty that he lived his life, and to carry his message of HIV prevention and tolerance to new generations". Zamora’s time at the REAL WORLD-house brought a face to the AIDS crisis. When Pedro Zamora’s health began to deteriorate in late 1994, it made front page news nationwide in the US, and his death at age 22 provoked a worldwide outpouring of grief.

People all over the world mourned the death of Pedro Zamora on 11 November 1994. Born in Havana, this young man made a name for himself for his appearance on the MTV reality show “The Real World: San Francisco”. Pedro moved into the show’s location – a house on Lombard Street – in February 1994. His HIV positive status and his open homosexuality made his involvement in the series controversial. But MTV’s young audience identified easily with this intelligent, good-looking Latino who had all the makings of a star. His presence on the show also meant that audiences in the USA and abroad had to engage with the topic of Aids. Even Bill Clinton cited him as exemplary in this context in a speech before the US Congress.

This screen adaptation of Pedro Zamora’s life depicts his childhood in Havana as the youngest of eight children, his emigration to the USA with part of his family in 1980, his mother’s death from cancer, his work as an Aids activist, his appearance on “The Real World” as well as the short time that was left to him to act subsequently. Pedro’s efforts not only made a deep impression on the target group but also affected film producers Richard Glatzer and Wash Westmoreland: “At the sad age of 17, he took what was then considered a death-sentence – his HIV diagnosis – and turned it into positive motivation. Instead of sinking into depression, Pedro opted for activism. He wanted to change people’s minds – and he did change them – and he still continues to do so."

Nick is a Los Angeles-based filmmaker who has written, directed and produced award-winning films, worked in television and produced and directed music videos and commercials over the past thirteen years.

His 2008 feature debut, "Pedro", the MTV biopic about AIDS activist Pedro Zamora, has played around the world, including the prestigious Toronto and Berlin Film Festivals. The film, penned by Dustin Lance Black ("Milk") was nominated for the 2009 Humanitas Prize, a 2010 WGA Award, and a 2010 GLAAD Award. "Pedro" had a short theatrical release and premiered on MTV and LOGO in April of 2009, and was released by Wolfe Video the same year.

An alumnus of the prestigious USC School of Cinematic Arts, Nick works as a screenwriting consultant and film instructor at Columbia College. His feature script "Finding Albie Finch" was a semifinalist for the Sundance Writer's Lab and he's currently in development on several features, including a supernatural thriller with Jeffrey Reddick (creator of "Final Destination.")