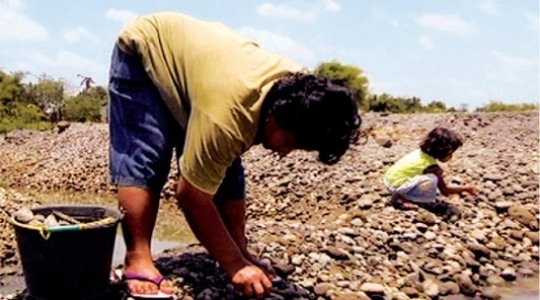 AT STAKE presents four short documentaries about the lives of women in Indonesia.

EFFORT FOR LOVE (dir.: A. E. Susanti) focuses on two migrant workers in Hong Kong who are both supporting large families in Java. One of these women is worried about losing her virginity as a result of an urgent gynaecological operation. The other has fallen in love with a fellow migrant worker. Torn as they are by feelings of guilt and joy, these two women must nonetheless try to make their way in life.

WHAT’S THE POINT (dir.: I. Setiawan, M. Ichsan) analyses the practice – still widespread – of female circumcision, and describes the religious reasons for this traditional mutilation.

OUR CHILDREN’S FUND (dir.: U. Agustin) takes us to an infamous Chinese cemetery in eastern Java which, come sundown, becomes a meeting place for prostitutes and their johns. For the protagonists of this film prostitution represents the only way to earn enough money to raise their children, because the pay from their day jobs just isn’t enough.

Ani Ema is film director.She was born in Jombang (1982). Ani has directed film like ,,At Stake" , ,,Donor Asi" or ,,Sungai Hudupku". She has won the Citra Award for best Documentary.

Iwan Setiawan is a film director and screenwriter. He has written the film ,,At Stake" and directed films like ,,Ujo & Saung Angklung".

Lucky Kuswandi is one of Indonesia's most exciting young directors. His films have been screened in International festivals worldwide, receiving accolades, awards and distribution. The Wall Street Journal praises his work as "original and uncharted."

His career started in 2006, when he was invited to the Berlinale Talent Campus in Berlin, Germany. It is a forum for young, promising filmmakers. He was selected among more than 6000 applicants around the world. In 2008 he directed a documentary short MISS OR MRS? as part of the anthology AT STAKE. The documentary was screened in the prestigious Berlin Film Festival 2009.

In 2010 he directed his first full-length film MADAME X. The film was nominated for 2 Asian Film Awards in Hong Kong at 2011, and won the Best Film Award at the Copenhagen LGBT Film Festival.

In 2014, Kuswandi released his second feature film, a love letter to Jakarta titled SELAMAT PAGI MALAM / IN THE ABSENCE OF THE SUN. The film won him the Best Director Award from the Indonesian Film Director's Club. The Straits Times praised the film, calling it "dripping with social commentary, the feature illustrates the contradictions that make up the rich mosaic that is one of Asia's most populous cities."

In 2015, Kuswandi's latest short film, THE FOX EXPLOITS THE TIGER'S MIGHT, competed at the Cannes Film Festival in the Semaine de la Critique (Critic's Week) Section. The film became the second Indonesian film ever screened in the section, and the first in 26 years. The film won Best Short Film & Best Director at the Silver Screen Awards in Singapore 2015. It also won Lucky his first Piala Citra Award for Best Short Film.

Lucky also works as a film lecturer in Universitas Multimedia Nusantara, teaching film directing. He has given film talks and workshops in various events, including ones held by the Media Development Authority (MDA)Singapore and the Motion Pictures of Association (MPAA).

Ucu Agustin Is an Indonesian documentary filmmaker who deal with issues such as social injustice and gender inequality in her works. She is a writer and was a journalist then self-though herself to do filmmaking. Her works have screened at Berlinale Film Festival, IDFA and many other film festival worldwide. She is now based in Washington DC.