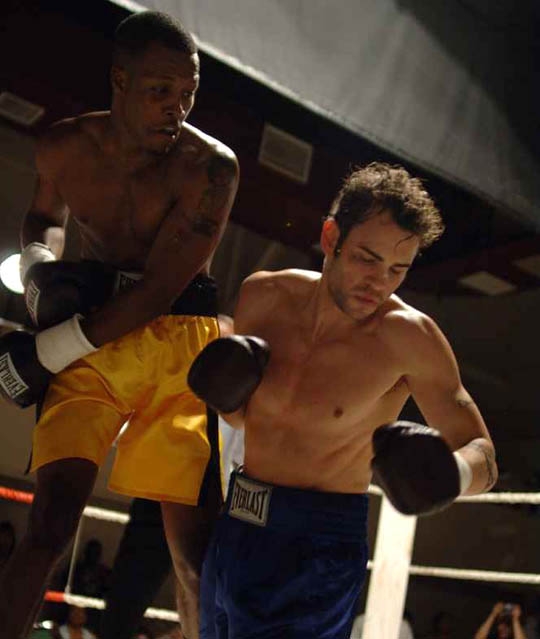 Donnie Rose went to prison after having beating up a young man so brutally that the victim will suffer for the rest of his life. Nine years later, Donnie is released from jail. He has changed a great deal in these past nine years. However, the place he came from - to which he now returns - is no different. It's the same violent, racist district that made him what he is. At the other end of the city, the black community are still bent on revenge. Ossie Paris has been chosen to see that justice is done. An exceptionally talented boxer, he challenges Donnie to a showdown. It's a fight that Donnie can't avoid; his gang and his relatives will make sure of that. George Carvey has waited nine long years to avenge his son's fate. But when the two men finally come face to face they realise that they both want the same thing - to leave the past behind. As the subliminal racism rises to the surface, George and Donnie make what seems to be an odd couple. Their alliance makes them outsiders to both camps, which will only be satisfied once the blood starts to flow in the boxing ring.

Clement Virgo (born June 1, 1966 in Montego Bay, Jamaica) is a Canadian filmmaker. He co-wrote and directed the six-part miniseries adaptation of Lawrence Hill's bestselling novel The Book of Negroes (2015), starring Aunjanue Ellis, Cuba Gooding Jr., Lou Gossett Jr., Ben Chaplin, Jane Alexander and Lyriq Bent that aired to wide acclaim and a record-breaking 1.7 million Canadian viewers in January 2015 on CBC in Canada. It went on to premiere in February 2015 in the US, drawing landmark ratings for BET (Black Entertainment Television.) Additional accolades for the miniseries include eleven Canadian Screen Awards, two U.S. Critics Choice Television Awards nominations for Best Limited Series and Best Actress in a Limited Series (Aunjanue Ellis), three 2015 NAACP Image Award Nominations including Best Miniseries, Best Actor (Cuba Gooding Jr.), Best Actress (Ellis), and the NAACP Award for Best Writing in a TV Movie or Miniseries for Virgo and Lawrence Hill. The Book of Negroes was also named one of 60 finalists for the 2016 Peabody Awards.Virgo has also received wide acclaim for his work in television. His recent credits include The Wire for HBO, The L Word for Showtime, Baz Luhrmann’s upcoming Netflix drama The Get Down (2016), American Crime for ABC, and the upcoming OWN network drama series Greenleaf (2016), on which he is also serving as Executive Producer with Oprah Winfrey.His previous feature, the boxing drama Poor Boy's Game, stars Danny Glover and Rossif Sutherland. The film world-premiered at the 2007 Berlin International Film Festival, Panorama Special Section, and was presented as a Special Selection at the 2007 Toronto International Film Festival. Poor Boy’s Game also earned Virgo a nomination in 2007 for the DGC Outstanding Achievement Craft Award for direction of a motion picture film. In a review for Variety, critic Leslie Felperin writes “…Poor Boy’s Game may rep [Virgo’s] best work so far, blending seamlessly his preoccupation with race, fluid identities, and complex sexuality.” Virgo’s Lie with Me caused a stir at the 2005 Toronto International Film Festival for its artistically daring portrayal of explicit sexual themes. Starring Lauren Lee Smith and Eric Balfour, Lie With Me had its European premiere at the 2006 Berlin International Film Festival, Panorama Section. It has been distributed internationally in over 30 territories, and sold to Showtime in the US.Born in Jamaica, Virgo immigrated to Canada at the age of 11. His first short film, Save My Lost Nigga’ Soul, won Best Film prizes at the Toronto, Fespaco and Chicago Film Festivals. His other films include Rude, which world premiered at the Cannes Film Festival, The Planet of Junior Brown, which earned Virgo an Emmy nomination, and Love Come Down.Since 2010, Virgo has also presented a series of intimate annual talks to celebrate Black History Month in Toronto with such notable guests as Lee Daniels, Norman Jewison, Spike Lee, Pam Grier, John Singleton, and Chris Tucker.