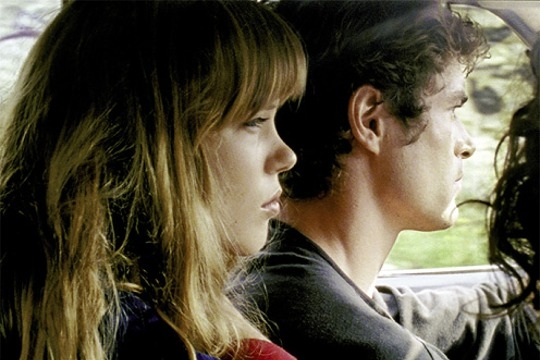 Sam is driving south. Three difficult passengers travel with him: Léa, her constantly filming brother Matthieu and the good looking Jérémie. The three youths – in the hight of their adolescence – begin to rouse the normally introverted man. In parallel the film tells the story of two children who subjected to the madness of their mother’s alcoholism and their father’s suicide. Little by little we get an idea of Sam’s despair, which seems to be mirrored in his encounter with the youths … Sam decides to leave the three behind at a bus stop. The trip south could lead him anywhere: to a deep love, into the next tree or to a reckoning with his mother in Spain.

Sébastien Lifshitz: “The film plays with the codes of the Western. It is built around a secretive, hardened character who doesn’t speak and who sets out to seek revenge. Is the mission he gives himself a good thing? Probably not. The further he travels, the more memories resurface. They pile up and back him into a corner. And these memories show us where he’s from, where he’s going and what he will do. Not unlike the hero of the Western, Sam is a loner, a drifter, a man whose life has broken him.”

»For the beauty and honesty of his stories as much as the sensitive portrayal of his characters« in the film WILD SIDE, director Sébastien Lifshitz has already been awarded with the 2004 TEDDY AWARD for BEST FEATURE FILM.