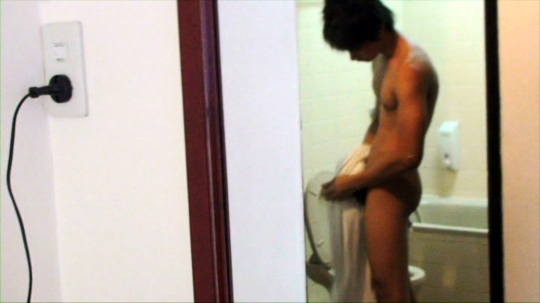 The movie is divided into seventeen unrelated segments and is a mixture of both documentary and experimental film genres. By inhabiting the lives of laymen from different parts of Thailand, the movie brings us through blurry trails, distorted memories and recently constructed histories. We unearth missing pieces of the puzzle in our attempt to understand why Thai democracy is still considered backwards and frozen. Are we deceiving ourselves that we are in a democratic society when we are not? The movie begins on a fishing boat, as we observe two boys conversing in an indecipherable tongue. It moves on to contemplate the light penetrating the sea and observe small lives swimming under the surface overlapped with a human body victimized by an unseen person. Beneath the darkness of a rubber farm, only faint light from the lamps illuminates the way. The truth from our present is superimposed with the blood-thirst from the past. The past is erased from the page of Thai history, and what is left is only the accusation that they are the terrorists.

A black cloak of forgetting, suppressing and covering has descended on the events that took place in Bangkok in spring 2010. Black as the night of complete darkness in which the film opens. Two men are in a fishing boat talking. One feels more than one sees that the seawater around them is warm and smooth, teeming with brightly-colored fish. By night, the rubber plantation also comes across as enticing and full of secrets, until lurid reminders of the bloody massacre flash up. This film arose from of a state of shock – about the news, about the subsequent repression in the authoritarian kingdom but also about the debilitating passivity that followed the pro-democracy Red Shirt uprising. It is a radical personal assessment in 17 episodes. An angry protest in the form of a diary, where sexual resistance and erotic fantasies are juxtaposed with thoughtful rummaging through the director’s family album, creating a confusing pamphlet. As a young boy in the 1970s, Thunska was already forced to flee Bangkok for the south with his mother. The film poses questions without knowing the answers, providing an unusual insight into an extremely traumatized society.
Dorothee Wenner

The authoritarian kingdom
There is a Thai saying that people’s lives are different from fishes. You cannot fish, hunt, kill for fun, or cook people whenever you feel like it. But we also say that we are a Buddhist country and we use Buddhism to instruct ourselves on why we should not kill – it is one of the five main precepts of Buddhism. Yet those two statements feel surreal and out of place since we are ready to strike whoever is accused, without concrete evidence, of slandering the nation, religion, or the king. I was never been
involved in politics until my movie THIS AREA IS UNDER QUARANTAINE was banned from being shown at a Thai film festival by the Ministry of Culture. The reason given for banning the film was that it was to preserve national security. It was then that I realized how frightening Thai politics could be, and how it has the power to control the way people absorb news and information. When the Bangkok massacre took place at the beginning of 2010, the media focused on entertainment and comedic news, instead of informing the country of what was really happening. It was as if the massacre was not real. The news program only depicted what the government wanted the people to believe. When news of the massacre finally filtered into the country via foreign news agencies, the government reacted by shutting down websites, including blocking access to YouTube videos in an attempt to block the truth.

False loyalty
All this reminds me of my childhood and of how important historical accounts were erased from textbooks, sidelined, or misunderstood. People who have stood up to demand a democracy are branded terrorists, while many actual terrorists have been praised, empowered and promoted to important political positions. I will make it easier for you. I will tell you what you might not understand. We, the people of Thailand, are taught to love our king as our own father. Whenever someone demands a democracy that we’ve never had, they are accused of “not loving the father” – the king. This incites people, especially the middle-class, to demonstrate their loyalty to the king. Last year, as the red shirts were pushing for a general election, many middleclass citizens joined a Facebook group, Social Sanction, with the apt acronym of “SS.” They went on a witch-hunt and publicly listed names, photos, personal details, home addresses and even phone numbers of those who supported the red shirts and their political movement. The “SS” denounced individuals on Facebook, harassed them via phone calls, and even demanded that the bosses of these individuals fire them. In some cases, people were even physically injured. This was all done in the name of the “father,” the king. The government condoned the behavior of the “SS.” They jailed individuals for insulting the king without proper trial, and many still remain locked up. Of course, I am a Thai, and I am afraid of what might happen. The government is powerful enough to arrest or punish anyone it deems its enemy. This movie cannot tell the whole truth, but at least it tells more truth than what has previously been shown in any other Thai film.
Thunska Pansittivorakul

The yellow shirts
The People’s Alliance for Democracy (PAD) is a political group that was active in Thailand’s political scene from 2005-2009. Its objective was to overthrow then-prime minister Thaksin Shinawatra from his post, and to push Abhisit Vejjajiva to succeed him as. The PAD movement resulted in a military coup d’état in 2006. Thailand was under a military government from 2006-2007. Subsequently, when a political party that pledges allegiance to Thaksin won the 2007 election, the PAD was re-established and conducted protests again in 2008. Their objective was to oust the Prime Minister at that time. The PAD accused the opposition of being disloyal to the monarchy. Eventually, the PAD managed to shut down Bangkok’s Suvannabhumi Airport. As a result, the prime minister at that time, accused of being Thaksin’s proxy, was ousted from power. Meanwhile, a high-ranking military official asked some members of parliament on Thaksin’s side to defect to the opposition party, thus paving the way for the opposition party to form a government. Abhisit Vejjajiva was promoted to become Thailand’s non-elected prime minister.

The red shirts
The National United Front of Democracy Against Dictatorship (UDD) was formed in 2007 to oppose the military government after the coup d’état in 2006. The UDD initially stopped its protest on December 26, 2007 after the political party on Thaksin’s side won the general election. The UDD was re-established to oppose the PAD. After Abhisit Vejjajiva became prime minister, the UDD went out to protest against Abhisit’s government since the protesters suspected that the military was responsible for its formation. Abhisit declared a state of emergency and ordered the troops to besiege the protesters until they ended their protest on April 14, 2009. One year later, on April 8, 2010, Abhisit again declared a state of emergency, shut down the UDD’s television broadcast channel, blocked websites that tried to report the truth, and forbade all television channels to report news that cast the government in an unfavorable light. On April 10, the government sent in troops to break up the protest, resulting in over twenty deaths and 850 injuries. On May 3, Abhisit proposed a reconciliation roadmap but later retracted it. From the 14th until the 18th of May, the government ordered the troops to besiege the protest area with tanks and snipers. As a result, ninety-one people were killed and more than 2,000 injured. The government extended the state of emergency for the subsequent seven months. During that time, more than 50,000 websites were blocked. Some of the protesters were hunted down, jailed and even murdered. All of the people responsible for the murders were anonymous and cannot be tracked down. Last year, the Thai army received an annual budget of 220,000 million baht (7.3 billion USD) from the government, the most expensive military budget in Thai history.

Thunska Pansittivorakul was born in Bangkok in 1973. He graduated in Art Education from Chulalongkorn University. He won the Grand Prize award at The 4th Taiwan International Documentary Festival in 2004 for 'Happy Berry' and his 'Santikhiri Sonata' won City of Lisbon Award for the best International Competition film at DocListboa, Portugal in 2019. His 'Heartbreak Pavilion' project won the Top Award from Pusan Promotion Plan (PPP) at The 10th Pusan International Film Festival in 2005. In 2007 he received the Silpatorn Award from The Ministry of Culture's Office of Contemporary Arts, which is awarded to one outstanding artist each year. The past honorees in the field of film include Pen-Ek Ratanaruang, Apichatpong Weerasethakul, Wisit Sasanatieng, etc.