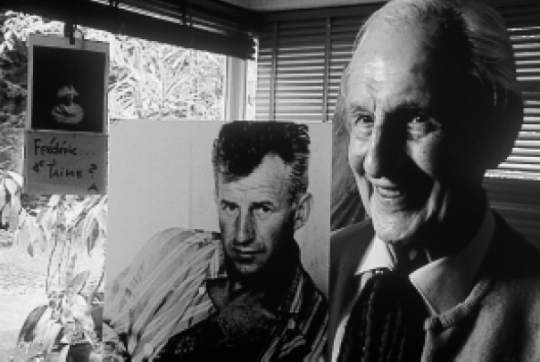 The ‘pink triangle’ is a familiar symbol throughout the gay movement, and yet its history and significance is largely unknown both to many homosexuals outside Germany as well a wide section of the public at large. Studies have revealed that only one in every four Americans are even aware that homosexuals were persecuted under the Nazis, let alone that the ‘pink triangle’ was used as a badge to identify homosexual prisoners. In interviews, five of the roughly one hundred thousand homosexuals persecuted by the Nazi regime recount their experiences and tell us the stories of their suffering between the years 1933 and 1945: – Gad Beck, born in 1923, was categorised as ‘half Jewish’ in 1933; he began attending a Jewish boys’ school in 1935, joined a Jewish resistance group in 1941, was arrested shortly before liberation and emigrated to Israel in 1947. In 1979 he returned to Germany where he worked with Heinz Galinski, the former head of Berlin’s Jewish Community; – Heinz Dörmer was born in 1912. He was active in the boy scout movement in his youth and in 1933 as “youth leader” was forced to become a member of the Hitler Youth; in 1935 he was barred from the same organisation on account of his homosexuality. He was arrested on many occasions and spent almost ten years in prisons and concentration camps; – Pierre Seel comes from Alsace-Lorraine originally. He was a prisoner of concentration camps at Schirmeck and Struthof and forced to join the German army in 1941 before being captured and spending a short time in a Russian POW camp; – Heinz F.,was born in 1905. During the twenties and thirties he was a member of the gay Bohemian circles of Berlin and Munich; from 1935 onwards, he spent nine years in concentration camps; – Albrecht Becker was born in 1906. He was arrested in 1935. He joined the German army following his release, because: “that’s where all the men were!”
(Albrecht Becker was also portrayed in Rosa von Praunheim's TOTE SCHWULE - LEBENDE LESBEN -- DEAD GAY MEN AND LIVING LESBIANS.)

Jeffrey Friedman: born in 1951 in Los Angeles. Has worked as assistant editor on documentaries and features since 1972, including Martin Scorsese’s RAGING BULL (1979).

Rob Epstein was born on April 6, 1955 in New Brunswick, New Jersey. The documentary filmmaker became known to a wider audience with his film The Times of Harvey Milk (1985), which encapsulates a crucial turning point in gay politics. Since collaborating on Word is Out, Epstein has produced and directed numerous non-fiction works for national television. He has taught in the graduate program at Tisch School of the Arts at New York University, and is currently co-chair of the Media Arts Department at California College of the Arts, where he is a professor