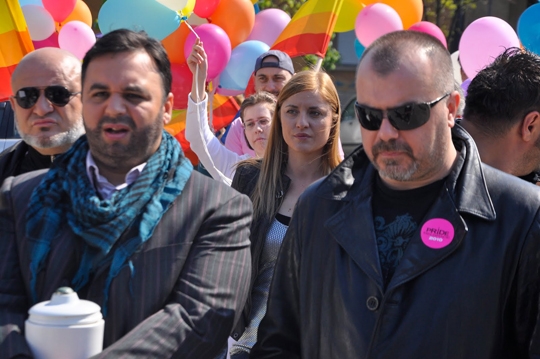 Turning transgression into a comedic principle, this turbulent farce that toys with clichés and stereotypes turned out to be an unexpected hit in Serbia and other ex-Yugoslavian countries. In PARADA a life-saving operation on a gangster’s pitbull terrier brings together two very different worlds: old school machismo meets gay obsession for interior design, homophobia meets overblown gender display as a number of former foes – Serbs, Bosnian Muslims, Kosovo-Albanians and Croatian war veterans – find themselves obliged to form a tenuous bond with a bunch of gay activists. This motley crew are sent on an impossible and probably suicidal mission to protect a fresh attempt to hold a Gay Pride parade from renewed and certain onslaught from nationalists and neo-Nazi organisations and make the event a success. Srdjan Dragojevic’s film takes a look at survival strategies for gays in Serbia and at a society that even now, years after the Balkan war, is still fragmented and riven by two entrenched fronts. And, as one would expect from any comedy worthy of the name, no matter how tumultuous the plot, real-life tragedy is always hovering in the background, just a step away.

Srđan Dragojević (Serbian Cyrillic: Срђан Драгојевић, pronounced [sř̩d͡ʑan drâɡojeʋitɕ], born 1 January 1963) is a Serbian film director and screenwriter, who emerged in the 1990s as a significant figure in Serbian cinema.

Since 2010, he has been a member of the Socialist Party of Serbia's (SPS) main board. In late August 2013 he became an SPS MP in the Serbian National Assembly. Born to a journalist father who headed a state-owned Belgrade-based newspaper and a French translator mother, Dragojević described himself as "the child of middle-level communist nomenklatura in Serbia". In his early youth, Dragojević played guitar in the punk/new wave band TV Moroni. He also dabbled in journalism, writing for Polet and Start magazines.

He obtained a degree in clinical psychology from the University of Belgrade's Faculty of Philosophy. In 1987 he started studying film and TV direction at the University of Arts' Faculty of Dramatic Arts (FDU) under the tutelage of Bajo Šaranović and got another degree.

In parallel, Dragojević was active in poetry, publishing a book of poems called Knjiga akcione poezije (The Book of Action Poetry) in 1986 and winning Branko's Award for it. By his own admission, much of his poetry was inspired by the 1920s Soviet art and poets like Vladimir Mayakovsky:
“     For me, Soviet art is the artistic pinnacle of the 20th century. The stories about thousands of people listening to poetry live both fascinated and inspired me. And it wasn't just any poetry, it was the most refined art, yet it managed to find its way to the ordinary populace - workers and peasants. And to communicate important ideas. And to speak to people that prior to that never had any experience with poetry. You know, after the success of my book, the Serbian Writers' Association sent me out to different poetry readings in various Cultural Centers. But, all you'd see there were twenty grandmas who probably came inside just to warm up a bit. No young person in sight, completely depressing! I knew I had to change my medium, right then and there.     ”