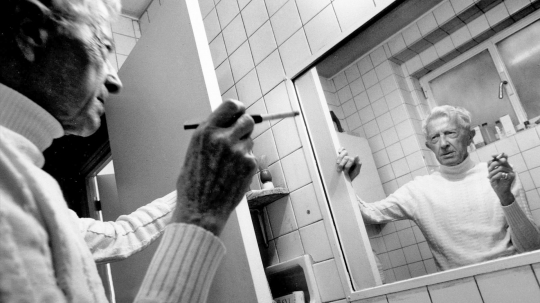 The fact that Paul Bowles is less well known than fellow writers like William S.Burroughs, Allen Ginsberg or Jack Kerouac may be because, after pursuing a nomadic lifestyle at the beginning of the 1950s, publicity-shy Bowles decided to settlein Tangiers. There, far away from the hurly-burly of the literary world, the town became a permanent home for this homosexual writer and composer and Jane, his lesbian wife. Bowles' austere, almost Calvinistic view of humankind and the psyche, as well as his outright refusal to subscribe to the zeitgeist, distinguished him from other Beat Generation writers through out his life. Based on moving interviews given by Bowles shortly before his death, Daniel Young's documentary takes a look at the life and work of this fascinating and complex personality; his rather eccentric but nonetheless deeply loyal marriage; and, naturally, the mythically glamorous Tangiers.Combined with anecdotes and comments from some of Bowles' fellow travellers and other contemporaries, including the brilliant Gore Vidal, the film delivers a multifaceted portrait of this radical visionary's life.

Born in Houston, Texas in 1971, he studied history and psychology at the university of Texas at Austin and attended the Summer Film School in New York. After a period in Budapest he began directing films and working on other productions. His films have screened at numerous festivals.