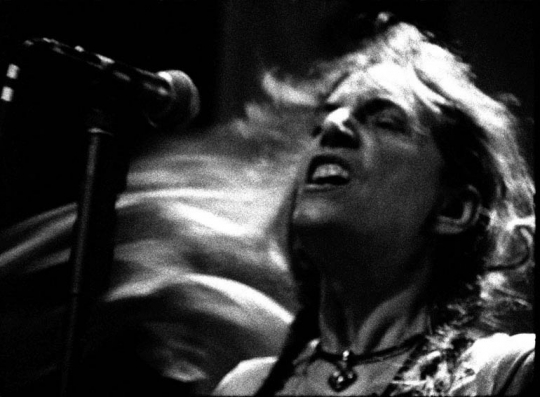 The photographer Steven Sebring went to his first Patti Smith concert eleven years ago. He was so impressed by her performance that he asked Patti Smith if he might photograph and film her. The footage he filmed was somewhat experimental in tone – for Steven Sebring had no professional film experience whatsoever – but it has resulted in a long-term observational work that is a very personal bio-pic, one that includes Patti Smith’s own comments on the filmed material.
Steven Sebring: “No person is just one thing. I know I am not just a fashion photographer. And Patti Smith is certainly not just a rock icon. She is much more. For me, this movie is about discovering who Patti Smith is.
This process of discovery has been over the course of eleven incredible years of filming. I can’t believe it, but a quarter of my life has been spent framing her in my lens. And through this film, I want to channel that experience to the audience. It all happened so organically. I was just interested in her and in getting to know her as a person. As our friendship blossomed over a decade, and as I got to know her, my lens was getting to know her as well.
I grew up with the top hits MTV fed me. But the music world has so much more to offer. That’s why Patti is so important. There’s something so raw about her, she cuts through all the artifice. Whether it’s through her poetry or her rocking out on stage, she’s the real thing. She’s a rock star, a poet, an artist, a mother, and an activist. She’s a folk hero. She’s been through a lot of tragedy and yet she has come through it. I can’t think of anyone who’s like her.”

Born in South Dakota and raised in Arizona, the focus of his early years were athletics, farming, carpentry and customizing cars. Self taught in photography as a teenager, he tinkered with movie cameras and co-opened a photo studio only to close it after several years to escape the confines of the Southwest.

He moved to Europe on a quest to broaden his horizons. He established himself as a photographer renown for a definitive style of merging raw realism with the fantasy of fashion. He has worked for editorial magazines and shot advertising and fashion campaigns for companies such as Ralph Lauren, Lanvin, Maybelline and Coach and over the last several years he has shot as well as directed several short films. It was however his work shooting celebrity and artist portraiture that led to his meeting the artist and performer Patti Smith. He was so inspired after seeing a performance of hers, that he encouraged her to allow him to film, resulting in the eleven year film project Dream of Life. It was experimental to some extent, as he had no official filmmaking background, yet his fashion experience gave him other opportunities to explore the medium further.

He directed two short films for the DKNY line by Donna Karan. The first, New York Stories (2003) is a little film about the big city as it follows a day in the life of three New Yorkers. It Stars Angela Lindvall, Sophie Dahl and Michelle Hicks and features cameos by Sylvia Miles, Lauren Erzersky, and Bill Sims Jr. The second, Road Stories (2004) is a little film about a big country, leaves the skylines of New York behind and takes up where the last film left off, following New Yorkers who are on a road trip across the U.S.A. Angela Lindvall reprises her role. It also stars Scarlet Chorvat, Johnny Messner, Sylvia Miles and Waylon Payne whose music is featured throughout the film. These films were both produced by Laird and Partners and released to critical acclaim.

During the last 11 years, while navigating between movie and still cameras, Sebring designed the photographic book titled Bygone Days. Released in 2005, it depicts the history of an American family and rural homestead life in Bison, South Dakota 1910- 1950. The photos were taken by Sebring’s great, great uncle, John Penor, who at 97, passed away in 2007 in the same sod house he was born in. The book was copublished with DAP publishing and has won numerous international awards.

In the fall of 2005 and spring 2006, Sebring photographed the art of renowned French Sculptors Claude and Francoise Lalanne for the much-anticipated book, Lalanne published in 2006 by Reed Krakoff, Paul Kasmin, and Ben Brown. Sebring’s photographs have been included in Patti smith’s book Patti Smith Complete; Lyrics, Reflections and Notes for the Future and on her albums such as Gung Ho, Land, and the latest album Twelve which was released in 2007. Sebring continues his collaboration with Patti Smith, producing the art installation Objects of Life, as well as creating the book Patti Smith: Dream of Life that chronicles the myriad of moments, musical transcripts, and unseen photographs of the unusual experience of filming the documentary.