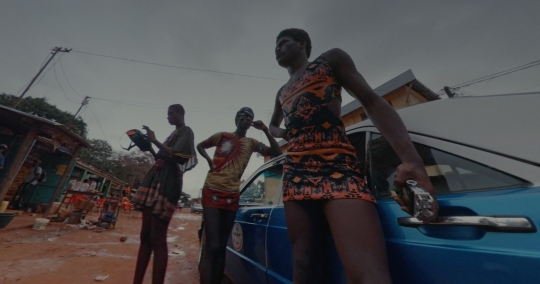 “No es” ('It isn’t') is a cumulative poem by Mariano Blatt, which is constantly written over the course of a lifetime. The text of the poem, a list of “what seems to be but isn’t”, to which verses are added over days, months, and years, can cover anything: images, people, memories, landscapes, phrases, ideas. With this list ringing in its head, Eduardo Williams’s film Parsi finds itself in a perpetual movement through spaces and around people. We are taken on a breathless ride through bustling neighborhoods, from person to person, thrown, dipped under water, rushed from image to image, creating in the process yet another poem which is caressed by, crashes into, and spins next to “No es”. Eduardo Williams’s films explore a fluid mode of observation, looking for mutual relations and open adventures in a physical and virtual network. He believes that uncertainty can yield its own sources of beauty and forms of small-scale resistance through communal escape and shared complicity, so as to chart the rhythms of autonomy over automatism.

Eduardo Williams, born in Argentina in 1987, studied at the Universidad del Cine in Buenos Aires before joining Le Fresnoy – Studio national des arts contemporains in France. He has directed various short films and a feature, which have been presented at international film festivals.

Mariano Blatt, born in Argentina in 1983, is a poet and literary editor. “Mi juventud unida” (Mansalva, 2015) collects his poems from 2005 to 2015. He co-directs Blatt & Ríos, an independent publishing house.