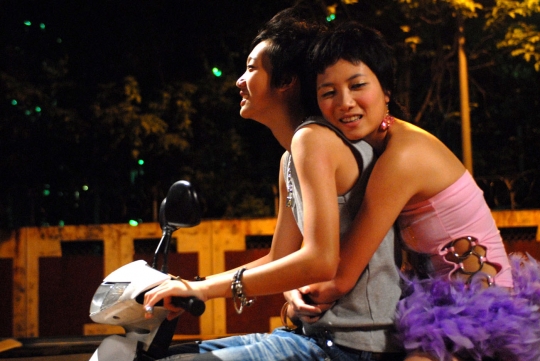 The eponymous drifting flowers in Zero Chou’s film are three Taiwanese women living in different parts of the island state: a child, a young girl and an old woman. All of them are seeking their true identity in the river of life and their stories are artistically interwoven in a poetic narrative. As time ebbs and flows, as love comes and goes, their journey towards finding themselves never ends.
First, eight-year-old Meigo discovers the bitter taste of first love when she accidentally sees her blind sister Jing kissing Chalkie, the tomboyish accordion player in their band. The little girl’s jealousy is so strong that the three are torn apart. In another time and another place, Lily struggles with her Alzheimer’s and her fragile memory of her youth. When her old friend Yen pays her a visit he brings an additional tragedy – afflicted with Aids, he has lost the will to live. And yet, between Lily’s hallucinations and Yen’s malaise, the two form an unexpected bond and rediscover the meaning of love and life. Finally, there is Chalkie, years before she left her hometown and joined the band. Back then, when she was still at school, the confused teenager bound up her growing breasts, despite her traditional family calling her a “boy-girl”. But then, an impromptu performance changes her life.

Born in Keeling, Taiwan, in 1969. After completing her studies in philosophy in 1992 she gained experience in independent documentary production and experimental projects working on films such as LIGHT (1995) and FLOATING ISLANDS (1999- 2000). She is considered to be one of Taiwan’s most talented filmmakers.