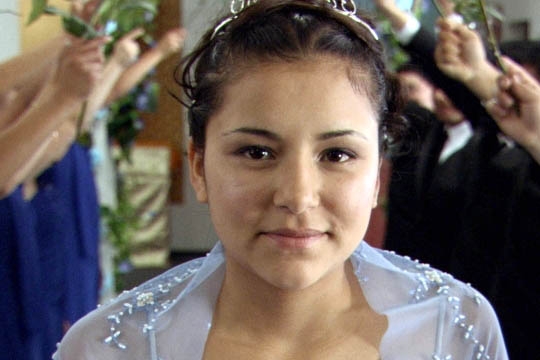 The Quinceañera is an important festival for Mexican girls. Celebrated on a her 15th birthday, it marks the turning point when a girl is recognised as a woman. Magdalena is the daughter of a staunchly devout family of Mexican Catholics living in Los Angeles. She too dreams of her Quinceañera, of the gorgeous white dress and the enormous stretch Hummer in which she will be chauffer-driven through the streets. But shortly before the great day dawns, she realises that she has fallen pregnant. The preparations for the celebration are extensive and it is only a matter of time before her parents also become aware of her condition. Cast out by her parents, she moves in with her great-great-uncle Tomas, an old man who earns a living selling a warm drink known as champurado on the streets. Carlos, one of Magdalena’s cousins, has also been thrown out of his house and is now living with the same uncle. One day, the rear building where Tomas has lived for many years, is sold. This part of the city is becoming fashionable and property prices are exploding. The house now belongs to an affluent gay couple. When the pair meet their new neighbours two completely different worlds collide. After a while it becomes impossible to conceal the pregnancy any longer and Magdalena, Tomas and Carlos begin to close ranks like a family – albeit a family of outsiders. It won’t be long before people like them are not welcome in this gentrified part of town.

Hailing from Leeds, England, Westmoreland earned his college degree in Politics at the University of Newcastle-upon-Tyne, and soon after moved to America to pursue filmmaking. His most recent film, "Still Alice," starring Julianne Moore, Kristen Stewart, Alec Baldwin and Kate Bosworth, saw Moore win nearly every acting award including a BAFTA and her first Oscar. In 2015, Westmoreland was awarded the Humanitas Prize in the feature film category for the movie, an award he shared with co-writer Richard Glatzer. The duo's previous pictures include "The Last of Robin Hood," starring Kevin Kline, Susan Sarandon and Dakota Fanning, as well as the 2006 movie "Quinceañera." The latter went on to win the Audience Award and the Grand Jury Prize at the 2006 Sundance Film Festival and picked up the Humanitas Prize, and the John Cassavetes Spirit Award.

Currently, Westmoreland is adapting the Susanna Jones novel, "The Earthquake Bird," for Amazon Studios and Scott Free. Later this year, he'll go into production on "Colette," a film about the iconic French novelist and her tumultuous first marriage, with Keira Knightly set to star as the eponymous lead.

The work of Richard Glatzer, born on January 28, 1952 in Queens, New York, who studied English at the University of Virginia, taught screenwriting at the School of Visual Arts in New York and was very proud to have been friends with the legendary Frank Capra, is not very extensive.

He directed five films, the first in 1993, a comedy with the paradoxical title "Mourning, Pain", which passed without pain or glory. The filmmaker only really appeared on the film's world map when he shot Quinceañera with his homosexual partner Wash Westmoreland, with whom he had previously shot the little-known The Fluffer.

The view of the Hispanic world and especially of the typical celebration of a teenage girl, in this case pregnant, who on her 15th birthday celebrates a kind of entry into the adult world, was one of the favourites of "indie" cinema in 2006 and was awarded at the Sundance. From that moment on, Glatzer and Westmoreland will also be a film couple directing together. Furthermore, they were married in 2013, taking advantage of the new legislation on gay marriage.

Although Errol Flynn's films are exciting and his private life has been quite busy, the biopic of actor Robin Hood's Last Affair, which deals with his last love affair with a minor, lacks a little punch. But thanks to Julianne Moore's wonderful and Oscar-winning performance, his film Alice has always been a must-see when thinking about a film that realistically depicts the development of middle-aged Alzheimer's.

On the occasion of the Oscar ceremony, Moore lovingly mentioned the absent girl at the Glatzer gala because of the advanced disease. Westmoreland issued a statement saying he was "devastated" by the death. "Rich was my soul mate, my coworker, my best friend and my life. Watching him fight ALS for four years with such grace and courage inspired me and everyone who knew him," he said.