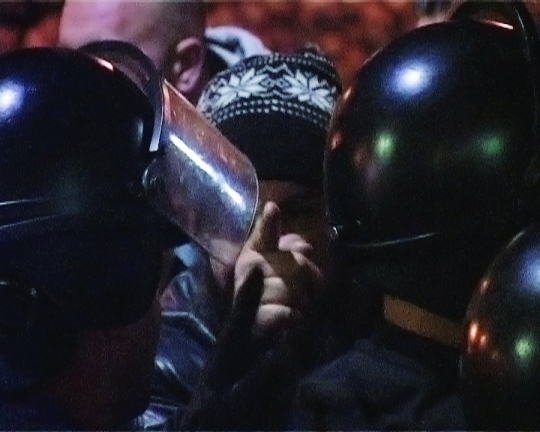 The first Queer Sarawejo Festival was held on September 24th, 2008. It included exhibitions, performances, public discussions, and films. The opening at the gallery of the Academy of Fine Arts was attacked and left eight people injured, forcing the organisers, a non-governmental organization Organization Q, to close the rest of the festival to the public and to eventually cancel the whole event. ”Kill the Gays“ was written on their signage. People that wanted to participate in the opening were verbally attacked and beaten up. Following the riots the festival organisers announced to the public that the originally 5 day long planned festival would not be able to continue due to the assailments.

Masa Hilcisin is a documentary filmmaker and producer, lecturer and scholar. She has been involved in a number of cultural and film projects in the region of former Yugoslavia. Her interests include documentary film with emphasis on social issues and different aspects of violation of human rights. Her documentary films have been screened at various film festivals around the world. She holds a Ph.D. in Film Studies and Audiovisual Culture from the Masaryk University and teaches a documentary film production at the Prague Film School.

She is also the Czech Ambassadors of EWA -European Women´s Audovisual Network.

Cazim Dervisevic is a documentary filmmaker/videographer and journalist with almost two decades of experience in media and film. His professional career began in 1996 as radio producer. Cazim started making documentary films in 2003 after establishing video production company XY Films in BiH with two colleagues. He worked on a number of documentary films and TV programs, as well as short fiction films, in the capacity of director, videographer and/or video editor, as well as producer. The transition from Bosnia to Czech Republic was followed by smaller freelance projects in both countries. He is currently working on two documentary films. One of the films is about a Czech-German family and its turbulent history, while the other deals with the challenges a same-sex couple faces trying to become parents. Several projects he worked on have received international awards.