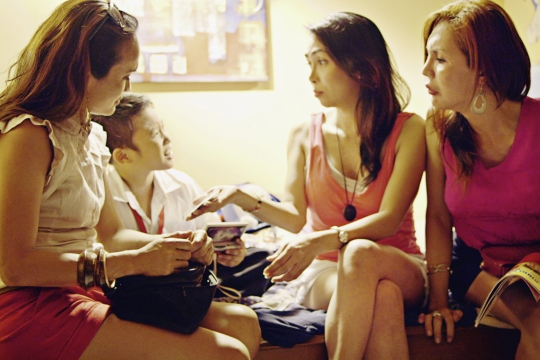 ‘You’ll be beautiful and it won’t even hurt!’ This is what Dorina promises dozens of her clients. She has come to Manila from Japan to help them realise their dream of once winning a Miss Gay or Miss Amazing beauty contest. Decked out in the eccentric and colourful costumes of the show there’s no sign of the earlier injections of liquid silicone to their cheeks, nose, lips, breasts, hips and behind. Dorina, who is herself transgender and unhappily in love with a dancer named Uno, knows her art well – and her illegal business. And she knows exactly what her clients want: ‘My looks are all I have. As long as I’m beautiful I’ll have a career.’ Until one day the dark side of this artificially created beauty comes to light. With documentary precision and breathtaking speed director Eduardo Roj Jr. follows his heroine as she moves through the harsh world of a community obsessed with beauty and with improving their chances of a career. Filmed at real locations using a hand-held camera, the film portrays a society dancing madly but vulnerably on a volcano.

Born in Manila, the Philippines in 1980,he studied at New Era University and the Philippine School of Interior Design. His first feature film, BAHAY BATA, screened at several international festivals and won numerous awards. QUICK CHANGE is his second feature.