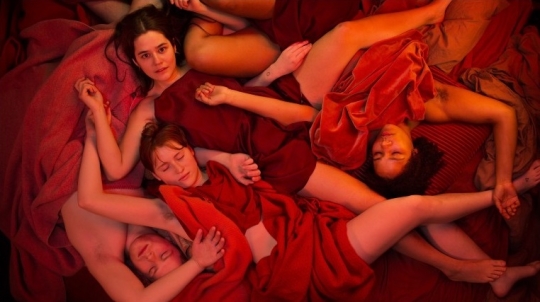 One kiss on the roof on a warm night in Copenhagen and Cathrine, in her early twenties, can no longer keep a grip on her life. On the one hand, there’s her colleague Selma, from whom she wants more after that first kiss. On the other, there’s her boyfriend Simon. For him, what little they have is actually plenty, and for some time now, even less has been enough for Simon in bed. For Cathrine, who
works at a call centre giving tips on sex and love, it’s definitely not enough, and after Selma’s kiss she doesn’t know what to do. She’s hungry, helpless and lonely. Torn between regret and desire, she drags everyone who loves her and who she loves into her chaos.

In episodes that are each barely quarter of an hour long, Danish director Amalie Næsby Fick and creator/writer Clara Mendes use intense images and an imposing score to unfold a contemporary love story that is as old as the hills. What if I don’t want what I want but can’t help myself? This six-part short-form series is being broadcast in Denmark during the sixth week of the year, a period traditionally
dedicated to the topic of sex education.

Born in Silkeborg, Denmark in 1986, she studied animation at the National Film School of Denmark. Her graduation film, Ztriwer, won the award for best children/youth film at the Copenhagen film festival CPH PIX. She co-directed the feature animation Den utrolige historie om den kæmpestore pære which premiered in the 2018 Generation. Sex is the first series that she has directed.