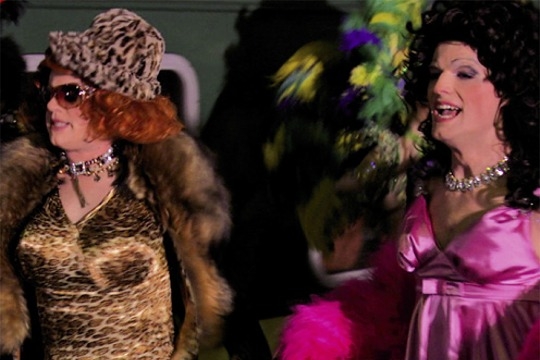 An unconventional comedy about five men, who have chosen an extravagant lifestyle and job. They work as drag queens. Rosa, Lusya, Fira, Lara and Gertruda – under these names they bring down the house wearing their stunning outfits and overwhelming make-up on the nightclub stage. Neither in their lives, nor on stage, are these people alike. They are different ages and have characters, different tempers, habits and dreams. Different circumstances have brought these people together for a short while. The film is the first mainstream Russian film about drag queens in a country where gays still face an uphill struggle to have their basic rights recognised.

Rosa, Lusya, Gelya, Lara and Fira are the names of five star Moscow transvestites – seen here through the eyes of a journalist who has come to interview them for a magazine.
Rosa’s real name is Robert. He is the club’s owner – a fortyish, ex-army man who was once married and fathered a child. His marriage broke up when his wife had to be admitted to a psychiatric home. He hasn’t seen or heard from her in eleven years – but then she walks into his club.
Lusya grew up as Dmitri in a tiny village in the sticks. He’d always dreamed of making it big in Moscow but first had to eke out a living doing all manner of jobs before discovering his talent as a dancer and performer. But now he longs to return to a simple life in the country.
Gelya was still known as Gennady when he once wrote a letter to Madonna at the age of eight. His letter was never answered. When he was ten his mother sent him to dancing school – for which he was mercilessly teased at school and called ‘girl’. Gennady’s mother was a seamstress. He later took great pleasure in taking his revenge by climbing into her gowns and using them to drive the worst of his deriders out of their minds at a party.
Lara began performing as a transvestite in the seventies. One of the members of the audience was a Communist functionary, who, it transpired, was secretly a bird of the same feather. Even as a child Fira was prone to shooting off his mouth. He began as a comic and later moved into transvestism. He’s been in love so often, but has now been diagnosed HIV-positive …

Born in Machatchkala, Dagestan on 20.8.1967, he graduated from the College of Drama, Music and Film in St. Petersburg and started his own theatre group in 1993. Since 2003 he has made entertainment programmes and documentary features on cultural topics for various broadcasters. He has also directed sporting events and other large-scale events. VESELCHAKI is his debut as a feature film director.