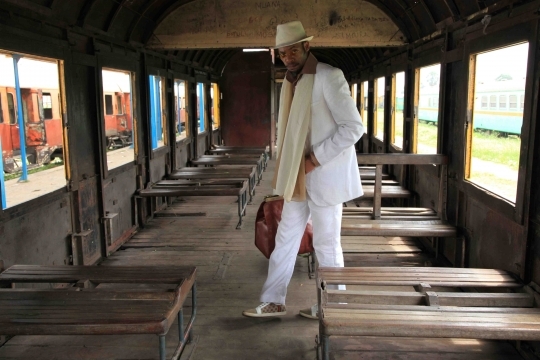 Kinshasa is a city of silky smooth and pulsating nightlife, always ready to go on forever. The happy few who have it all live the high life, never looking back on those who have nothing and live in envy, dreaming of their turn as kings and queens of the night. Riva is one of those dreamers who had nothing, until he returned from ten years away, his pockets full of cash and determined to have the time of his life. With his old pal, J.M., he sets out for a night of drink, dance and debauchery.

Queen of the night, mysterious, distant beauty, Nora's dance transfixes Riva. No matter that she belongs to a local gangster, Riva must have her. Could this be something real? The money Riva is spending belongs to his old boss in Angola, who, in hot pursuit, wreaks bloody havoc every step of his way through town to find Riva. The dream becomes a nightmare, as Riva suffers the cold light of day – and his glory time runs out in a sordid pit on the edge of town.

Kinshasa is running out of gas. As traffic on the streets of the massive city thins out, an incredible mechanism is set in motion in the underworld, which picks up more and more speed. A band of smugglers from neighboring Angola has stashed some gas but this is only supposed to be sold when the prices have risen even further – and it is clear whose pockets the money will end up in. A wild, crazy struggle for the position of king of the underworld breaks out. And the smart Riva goes and falls for his rival’s extremely attractive girlfriend. He starts playing with fire in the sultry Sai Sai club.

The young Congo filmmaker’s debut film is an action-packed thriller that was staged with as little fear as his heroes have when handling their weapons. Sex, greed and money drive the story that is told without a pause for breath, to the rhythm of a city that demands this tempo from all its inhabitants. The elegance with which Munga plays with cinematic conventions is astounding – as a genre film VIVA RIVA! does more than justice to Kinshasa’s secret reputation as a trendsetting city in all matters of fashion. Such well-dressed gangsters have not been seen in the movies for a long time.

Kinshasa, without fear or shame

In making VIVA RIVA!, I wanted to find a new way to talk about life in Kinshasa today – to describe how my hometown works and how it doesn’t work. I also felt the time was right to depict aspects of life in the capital that everyone knows exist but no one has ever talked about publicly.
Riva returns home after a ten-year absence with pockets full of cash to do what every young Kinshasan man dreams of. He is king for a rollicking good night – and keeps that night going on and on, scoffing at the plain truth that in the light of day he is nobody. Where can he be headed? The devil may care.
Over the past twenty years, Kinshasans have lived in bedlam, through every kind of spirit-crushing experience imaginable – war, crime, corruption, food and energy shortages, poverty and the breakup of the family structure – yet their clocks still keep on ticking, and life goes on.
As word got out that a film was being made, people all around us in the community began to reach out and help us in ways large and small – any way they could. Shooting the film as we did, we were constantly on our toes, ready to shift the scene, take off or improvise solutions at a moment’s notice. We sometimes let people know we were making the film and wanted to use their home, place of business or car. And almost all the time, the answer was, “Yes, please do!” In how many other cities, I wonder, could we have found such cooperation?
There are no acting schools in the Congo, so we made a first round of casting in the very small circuit of local theater companies, then a second round by casting a very wide net over the streets of the capital. We wanted to find Kinshasan actors who could bring something personal to the film – add some spry and sprightly energy to a film that was otherwise anchored in documentary realism.

Twenty candidates were selected to participate in a workshop that stressed screen-acting skills and included tai chi, dance and other exercises to put the players in touch with the way their bodies moved. The work we accomplished led us to sharpen our casting of certain roles and invite some participants into a second workshop where, over two months, we went further into defining characters, without working on specific dialogue, lines for which came later. Dialogue in the final film was entirely scripted – none of it was improvised.
All things were lining up so well on the production that we realized we had been offered a golden opportunity. It was time for us to envision a new world and to take a big step forward as storytellers. The actors, especially, took on the self-assured confidence of pioneers.
One of the most challenging aspects was that I had scripted nude scenes to be depicted in a culture where such scenes are taboo and never even implied. Our first thought was to bring in European or American actors; but then my second assistant, a young Congolese documentarian, pressed me to ask a number of local girls to consider playing the part. I explained to them that I wanted to properly portray the city and its club life, where we all know what is going on behind the walls. I wanted the film to be real.
Our work on VIVA RIVA! was resolutely modern. The film dives into its depiction of tough situations so forthrightly that we hope it will help sweep away some of the old school perceptions of Africa and African art. Our aim was simply to work without fear or shame of who we are and the issues we face today.
I hope, especially for young people coming up, that this film will be a convincing argument that we can make it as a society – and that cinema can be part of our lives. Under the dictatorship, we were not allowed to even think about making films and several decades of Congolese filmmakers went into self-imposed exile.
A young artist I met eight years ago dismissed me as mad when I told him I wanted to make films in the Democratic Republic of the Congo. Then he visited the shoot of VIVA RIVA!, to experience the energy of the cast and crew hard at work; and is now a believer. Our future can be different if we really want it to be.

A blast from start to finish, writer-director Djo Tunda wa Munga’s VIVA RIVA! marks the Congo as an African filmmaking center to watch. Reveling in genre codes and reminiscent of Tony Scott’s mix of adrenaline and style, this sexy actioner, hinging on gasoline smuggling, betrayals and hot-blooded eros, is certain to travel to fests looking for a fun, well-made genre programmer.
Riva is a likable Kinshasa-based hustler aiming to smuggle a sizable cache of pricey gasoline from a shady bunch of Angolans. His focus is understandably distracted by the stunning Nora, the mistress of tough local crime boss Azor. With thugs to the right and left of him, Riva presses his luck with Nora by his side, and Munga matches his hero’s nerve. Antoine Roch’s digital cinematography and Yves Langlois’ acute editing support the helmer’s ambition for moviemaking that’s neither African art cinema nor cheapo Nollywood escapism.

It’s hard to know what to expect going into a film by a nation that has produced as few movies as the Democratic Republic of the Congo… but their young national cinema seems to already have action down pat.
VIVA RIVA! plays out like a third-world rendering of a dystopia that’s rooted far-too-closely in today’s sociopolitical conditions. There’s a gas shortage in the Congo, which makes those that can import it, by any means, kingpins as far as life in the capital Kinshasa goes.
[Munga has] made ninety minutes of quickly paced revenge and not focused his film solely on how truly in the dumps a lot of his home country lives its daily lives. That’s not to say that there’s not some not-so-subtle commentary dropped in, but what it does mean is that the foremost purpose of the film is entertainment, with some visits from the usual themes of corruption, poverty, exploitation and loss along the way.
Munga makes no bones about the strained relations between the DRC and neighboring Angola. (…)
I don’t know if the film will successfully launch the great Central African cinema that is the filmmaker’s dream, but I don’t think that was the point. A lot of filmmakers would have gone into their debut trying to show a really real Africa to the rest of the world to make a statement. Instead, Munga kept it simple and chose to try showing a stylized, slick Africa rooted in its entirely real problems and annoyances (one running gag: the power keeps going out) geared towards an African audience to give them something to relate to.

Djo Tunda wa Munga was born on October 25, 1972 in the Congo.
After studying directing at Belgium’s Institut National Supérieur des Arts du spectacle et des techniques de diffusion (INSAS),
he returned to his home country. Since then, he has applied his
knowledge to building up a new Congolese cinema. In 2006 he
wrote the screenplay for an episode of the twelve-part series
Zacle Presents, which dealt with the topic of AIDS. Viva Riva! Is
his first full-length feature film.