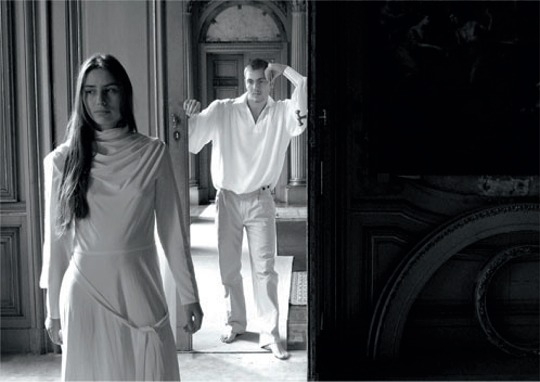 »One could go about a concert or opera evening differently. Especially in order to attract a young audience.« For the Belgian experimentalfilmmaker Eric de Kuyper (CASTA DIVA, NAUGHTY BOYS, A STRANGE LOVE AFFAIR, PINK ULYSSES), opera is undead – not quite living, but not quite dead. He sees a possibility to resurrect opera in the performance arts. "Genoveva" remains Robert Schumann’s only opera. In black and white images, Eric de Kuyper tries to expose Schumann’s musically failed attempt to express sexual passion and appetite … Genoveva is a filmic part of a live performance.

For the last couple of years, Eric de Kuyper has been curating “concert en images”, a series of events in which he combines silent films with live classical music in various venues, such as the Cinémathèque Royale de Belgique and the Palais des Beaux-Arts in Brussels. In VARIATIONEN AUF GENOVEVA VON ROBERT SCHUMANN he uses the opposite approach: An existing musical work is confronted with a film, especially made for this occasion. Schumann‘s opera has an ‘impossible libretto’, a reason why this work is rarely produced and the reason why the “Operadagen Rotterdam” asked de Kuyper to put up a “semi-konzertante” performance.
The original opera is based on the story of Genevieve of Brabant, a medieval legend, set in the 8th century, about a wife who is falsely accused of adultery while her husband is away at war. Schumann‘s opera is about sexual passion, a subject de Kuyper transfers into film while staging the film as an opera covering one fourth of the entire play.
De Kuyper conceived the film in the spirit of an early silent movie with long shots in black and white. The idea of John Cage’s aleatoric music meets classical music while the images illustrate neither the action, nor the music. In this way, the film functions like an evocation of what is happening. The live performance of the music is not always synchronized with the images of the film. The vocals in the film and in the live performance - executing the staircase sequence in the end - are performed by Olivia Poppe and Adrian Florin Mirza.

Eric de Kuyper, born 1942 in Brussels, lives and works in a small town in the Rhine Valley, Germany. He is an experimental film director and writer. He collaborated with Chantal Akerman in the writing of La Captive (2000) and Demain on déménage (2004). Filmography (selection): 1982: Casta Diva, 1984: Naughty Boys, 1985: A Strange Love Affair and 1990: Pink Ulysses.