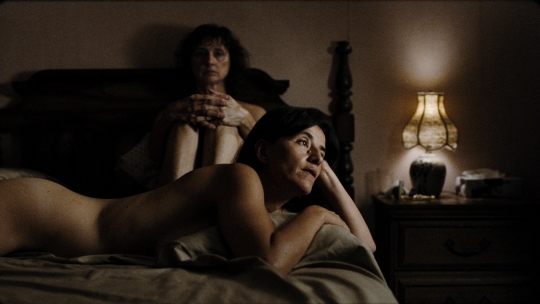 A lonely bus stop, a trumpet-playing scout and a woman who refuses to pay him anything for his off-tune performance. This dryly humorous opening sets the tone forrest of the film which tells the story of Vic, a woman who has just been released fromprison and who is on the hunt for some peace and quiet. She moves into a relative’shouse in the Canadian forest and receives a visit from her lover, Flo. The two of themtake each day as it comes, exploring the countryside in a golf cart and enjoying thescenery. Life could be so wonderful – if only Vic’s rather unconventional probationofficer wouldn’t keep turning up. Vic also finds her girlfriend’s sorties to local barsunsettling. A friendly woman in the neighbourhood, a gardener, soon turns out to be ashadow from the past; signs of impending threat begin to multiply and even the forestseems to have treacherous traps in store. With his film’s collection of eccentriccharacters, his bizarre directing ideas and the work’s mysterious atmosphere, filmcritic and documentary/drama director Denis Côté creates an artificial world with itsown completely unpredictable reality.

Born in New Brunswick in Canada in 1973, he began his career producing and directing over a dozen low budget shorts whilst also working as a radio presenter and film critic for the Montréal weekly newspaper Ici. In 2005 he directed his first feature LES ÉTATS NORDIQUES. BESTIAIRE screened at the Berlinale Forum in 2012.