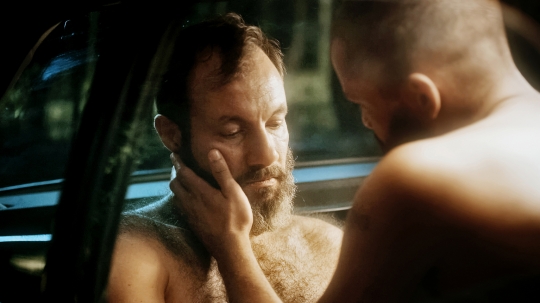 The area around Catalan in Brazil’s state of Goiás is dry, very dry. Sandro’s life here is somewhat monotonous. He works in a fertiliser factory, goes swimming and spends his evenings doing jigsaw puzzles of landscapes. Sandro has a purely sexual relationship with his colleague Ricardo. He always seems to be a bit of an outsider, not comfortable in his own skin, not really belonging. When Maicon, a
man straight out of a Tom-of-Finland illustration, shows up in their small town and flirts with Ricardo, Sandro’s burgeoning feelings of jealousy set a change in motion.
The sober images of Sandro’s working environment, trade union meetings and cigarette breaks are in stark contrast to his dreamlike sex fantasies. These tableaux vivant-like scenes feature people in leather and latex and fetishistic images of chrome-plated motorcycles.

The film’s blend of sobriety and artificial exaggeration, as well as its witty use of contradictory music and slow dissolves, makes it feel like a hot, dusty summer, adorned with male bodies full of passion and sexual desire.