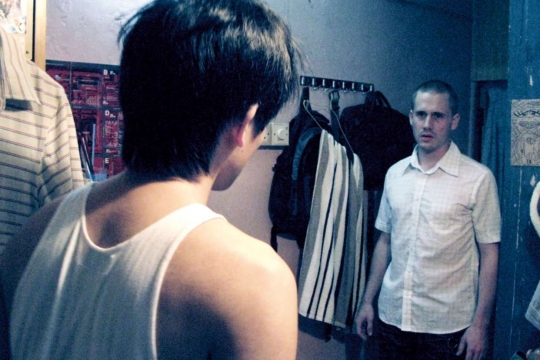 The two young men Pascal and Ricky are both foreigners living in Hong Kong. While Pascal, a Swiss, ekes out a living from street theater and petty crime, Ricky, who comes from Beijing, is a dependable helper in a humble restaurant. One fateful day their paths cross and they fall head over heels in love with each other and boldly decide to move in together. But their love is soon put to the test – the fickle Pascal makes high demands on gentle Ricky. Years later, long after their relationship comes to a sudden end, Ricky sets off in search of his former lover, and not far from Lucerne he meets a young man who looks just like Pascal. Like the broken melody of a wind chime, the secret of this poetic love story is gradually revealed in brief flashbacks. Archaic images of an austere Switzerland with its rugged mountains and rustic restaurant culture reflect not only the loneliness and pain of the lovelorn protagonist Ricky, they also stand in stark contrast to the vitality and colorfulness of life in Hong Kong where, transcending all cultural barriers, the couple experienced moments of profound happiness.

The Chinese believe that when someone dies, his soul will return home on the seventh day after his death. His soul is offered a memory-erasing soup in preparation for rebirth. After drinking the soup, all his memories will be wiped away and his soul will reincarnate and start a new life as a baby. In 2003,
three Swiss people who were important in my life passed away one by one – my lovers’ parents, who lived in a small village, and my best friend, who committed suicide. After all the tears and funerals, I still sometimes wake up in the morning wanting to give them a call, thinking about visiting them at their beautiful farm, but then I remember that they have died. This battle of consciously knowing someone has died and the unconscious desire to get in touch with them became the motivations
for this production, and I believe this feeling is common to people who experience the death of loved ones. How long does it take for someone to recognize thoroughly the fact of his beloved’s death?
WU SHENG FENG LING is a film about letting go. It presents the differences between Eastern and Western philosophies of life, death and the afterlife. It also presents the integration of Eastern and Western mentalities. WU SHENG FENG LING is partially autobiographic. It seeks to blur the boundary between ethics, race and sexuality.

Body language and emotions play a very important role in this film. On the other hand, since this is a film that deals with cultural differences, the dialogue is underlaid with subtext. This film tells a story through gestures and subtle facial expressions. The selection of the landscapes/cityscapes of Hong
Kong, Switzerland and Beijing already gives a very rich visual impact to the film.
Cinematographically, by taking advantage of digital video production, the Swiss scenes are comparatively more static than the Hong Kong scenes, and the Beijing scenes are the most realistic. This film was shot in Switzerland in winter to capture the emptiness of the silent landscape. In contrast, the shooting in Hong Kong was in summer, and we captured high-rise buildings and city life. This contrast is reflected in the emotions of the protagonists.
This film is about memories and reality; therefore it was best to present the film in a non-chronological fashion. Fragments of Hong Kong (i.e. memories) are intercut with the Swiss and Beijing parts (i.e. present time). The bridge between spaces and time is linked by the similar emotions of the characters, the atmosphere of the events and the sensitivity of the music.
Kit Hung

Kit Hung was born in 1977 and graduated from the MFA program in the Department of Film, Video and New Media at the School of the Art Institute of Chicago. Soundless Wind Chime was developed during his studies in Chicago and it is his debut feature, on which he has been working for five years. He currently devides his time between Hong Kong and Switzerland.