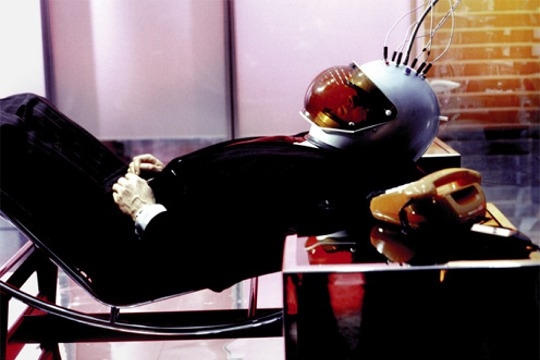 In a not too distant future, scientists at the Institute for Cybernetics develop a computer. It can simulate a world that perfectly resembles the real world. This virtual reality is populated by identity units, which have the same properties as people. Fred Stiller, who is promoted to head of the project, learns from a colleague, Günther Lause, that his predecessor made a terrible discovery shortly before his death. When Stiller begins to research, Lause disappears. No one in the institute seems to have known him.

The Institute for Cybernetics and Futurology’s most important project is Simulacron 1 – an electronic monster designed to put ordinary computer technology on an entirely new plane. Simulacron is able to make accurate predictions of social, economic and political events as if they were really happening in the present. This feature makes Simulacron of interest to two groups of people: those who are keen to improve living conditions in the future, and those who are hoping for information that will give them an advantage over their competitors. The research project’s initiator and director is Professor Vollmer who, however, dies suddenly, in mysterious circumstances. His death is quickly agreed to have been suicide – after all, shortly before his death he did show signs of a strange mental illness – and Siskins, the institute’s powerful head, appoints Dr Stiller as the scientist’s successor. However, Stiller’s colleagues soon begin to detect similarly bizarre symptoms in the new project director. Stiller attempts to forget his problems by throwing himself into his work on Simulacron. To him, Simulacron is not just a lifeless machine but a whole microcosm and, although he knows that the so-called ‘identity units’ are simply the result of electronic processes they sometimes look just like real people. Is Stiller schizophrenic? Many would seem to think so. But then, one day, during a routine transfer of his consciousness into the Simulacron’s chip, Stiller thinks he may have spotted an old acquaintance.

Born in Bad Wörishofen on 31.5.1945, he died in Munich on 10.6.1982. He began making films and stage plays in Munich in 1966/67. He directed his first feature film in 1969. An actor, dramatist, radio playwright and producer, he was the most productive force in New German Cinema. Today, all rights to Fassbinder’s works are owned by the Rainer Werner Fassbinder Foundation. The foundation’s aim is to preserve and disseminate the director’s comprehensive oeuvre.